Earlier this month I went to Anaheim, Calif., for work, to cover the California Dental Association conference for dentists. I was one of the editors who helped publish an at-show newspaper for Dental Tribune.

I interviewed a dentist who invented a tool to help make for tooth extractions easier for dentists and patients, I conducted “man-on-the-street” interviews with several of the attendees, and I wrote up a wine-tasting event. See below for my articles, as they appeared in print.

For the wine-tasting article, fans of the Rolling Stones might catch the reference to one of the lyrics from the Exile on Main Street album in the headline. 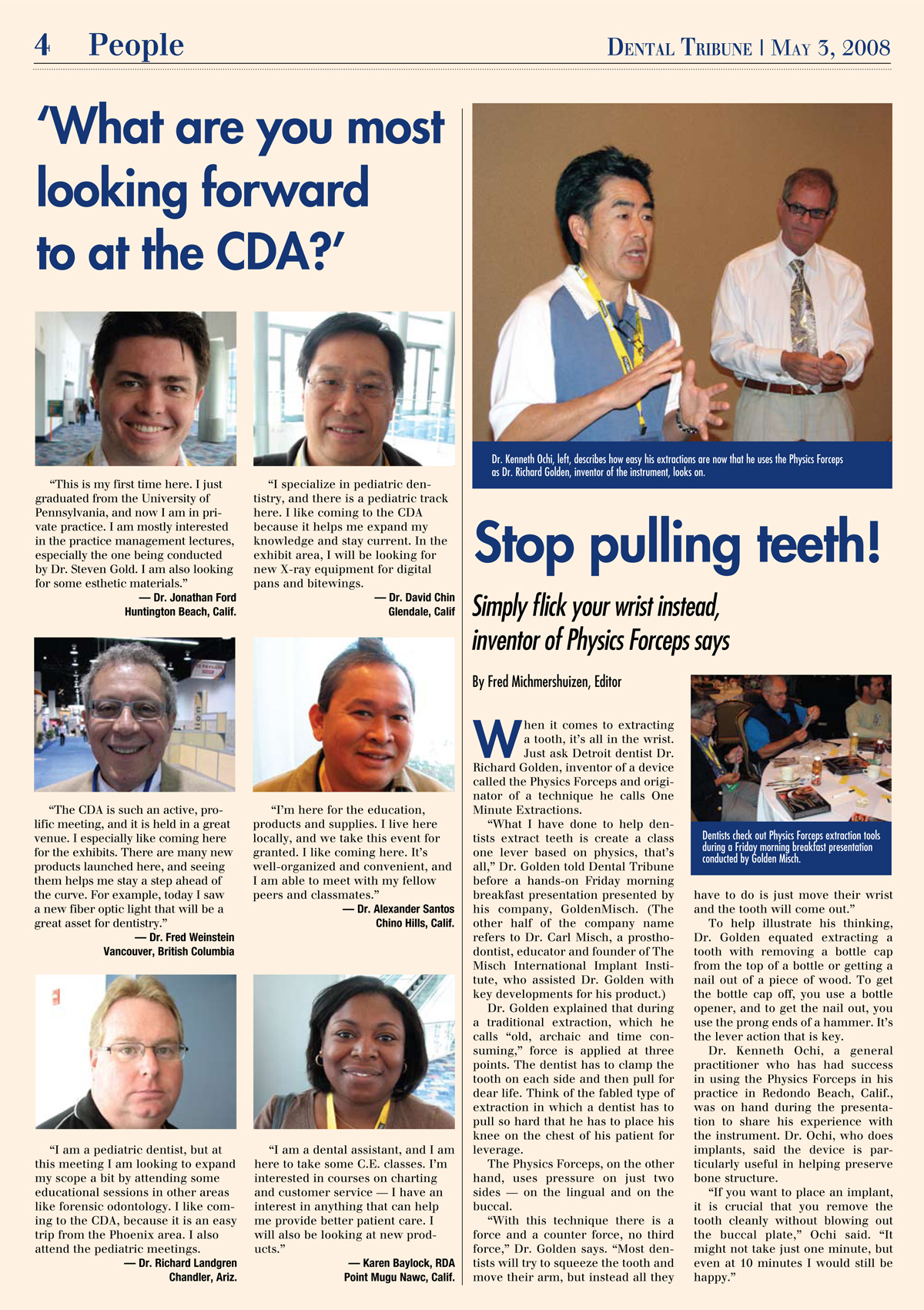 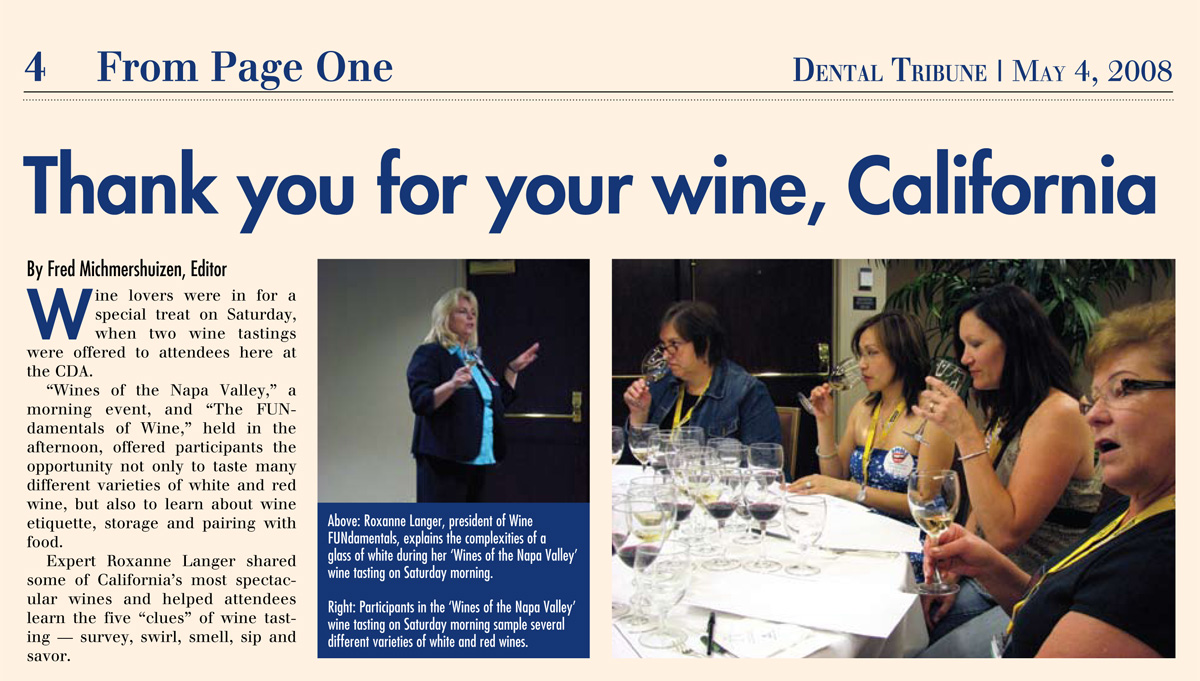 I wrote the concert review below after attending the Rolling Stones show at the Pontiac Silverdome on Dec. 2, 1997. It was the fourth time I had seen the Stones. I attended with my cousin Laurie.

The Stones show Dec. 2 at the Pontiac Silverdome outside Detroit in my native state of Michigan was for the most part fantastic. Aside from a few rough edges, especially in the first half of the show, the lads were in good form.

The high point of the concert was of course the three-song set from the small center stage. They should stay out there for more songs than just three. When the Stones are performing on that little stage, they play like more of a band than when they are on the humongous main stage. I think that being in close physical proximity to each other makes them play much tighter and better. “Little Queenie” was magic, especially when Keith did the famous Chuck Berry riff. Before they launched into “Like a Rolling Stone,” Mick said, “Here’s one Bob Dylan wrote for us many years ago.” (I knew he was joking, but did everyone else?) I wasn’t too happy when the Stones covered this one, but it really did sound incredible on stage. Mick sings it so well, and the crowd went absolutely wild for it. The third and final song from the small stage was “You Got Me Rocking,” not one of my favorites, but I was happy that they did something from the “Voodoo” album. The song was performed well and the crowd was really getting into it.

The Stones did four excellent new songs in this show—”Flip the Switch,” “ASMB,” “Out of Control,” and “Saint of Me”—but none of them was received as well as I had hoped. “Out of Control” has some awesome lyrics: specifically, the line where Mick sings, “And the drunks and the homeless they all know me,” but the echoes in the Silverdome sound system made it difficult to hear many of the words. (Later in the show the sound got much better.) As for the new songs, personally I wish they would throw in “Gunface,” which I think is the best song on the new album. (You were right, Steve!) During “ASMB,” Mick and the male backup singer included a line in the rap part about coming to rock “Detroit City,” but you couldn’t hear the male backup singer very well at all. (Every time Mick acknowledged the crowd by saying “Detroit City,” the crowd went wild.)

The cybercast vote went to “Just My Imagination.” Mick changed the line “She doesn’t even know me” to “she doesn’t f*cking know me.” Except for the tight last few chords, that song didn’t work at all, perhaps because they have not performed it much. Another misfire was “19th Nervous Breakdown.” To make that song sound great live, the Stones should have done two things: first, the descending bass line from the original should have been included (preferably with Bill Wyman performing it), and Mick should have gotten the crowd riled up to join him in the “Here-it-comes”es.

They had a mishap after “Sympathy for the Devil,” when Mick was leading the audience in an impromptu sing-along with the “woo-woos,” and Keith interrupted that by starting into “Tumbling Dice.” Oops.

“Gimme Shelter,” Miss You,” and all of the big hits at the end of the show sounded terrific. Keith played a bit of piano during “Honky Tonk Women,” and it was refreshing to see them doing that one without blowup dolls or hokey video clips. Just them performing it. They really sounded incredible. “Start Me Up” is one of my favorite Stones songs because it is so simple yet so much fun. “Jumping Jack Flash” and “Brown Sugar” are also a thrill. I was pleased that they included “You Can’t Always Get” in the encore. I must admit, though, that during “Brown Sugar” I was looking more at the glitter shower that was engulfing our section than the stage. And as always I enjoyed watching Mick dance and gyrate and run from one end of the stage to the other. Too bad he didn’t take off his shirt.

This was the fourth Stones show I had been to. (I also saw the first Giants Stadium show in September, plus shows on the ’89 and ’94 tour.) I am also going to see the Stones for at least two of the three Madison Square Garden shows in January.

A few other comments from this diehard Stones fan:

One final note about the Silverdome show: I heard secondhand news reports when I got home that night that a guy who was dancing on a handrail during the show fell to his death. If this is true, and I believe it is, I certainly did not see any evidence of it from where I was sitting.

I posted this review to the IORR (It’s Only Rock N Roll) fan site. To see other reviews from this show, click here.