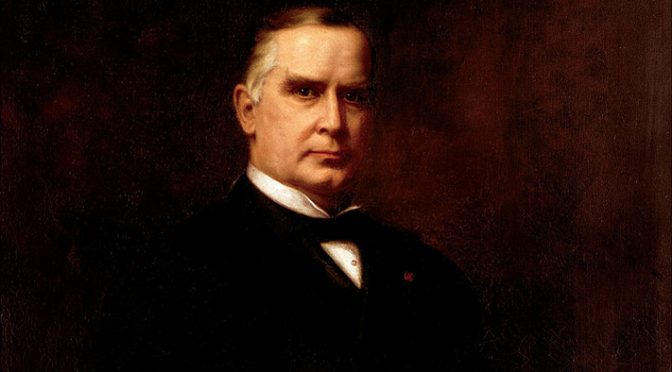 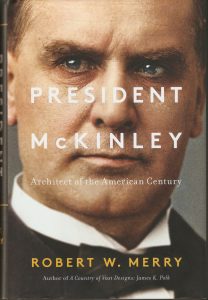 It was under the calm, steady leadership of William McKinley that the United States first became a force to be reckoned with on the world stage. That’s according to the biography “President McKinley: Architect of the American Century,” by Robert W. Merry. Clocking in at just under 500 pages, the book describes how McKinley took us to war against Spain to liberate Cuba. Along the way we sunk the Spanish fleet in the Philippines and turned that into a U.S. protectorate. But that turned bloody when native militants fought for their own independence and we wouldn’t grant it. We sent troops to put down the insurgency and to help the Filipinos establish their own U.S.-approved self-government. (What could possibly go wrong?) We also seized Guam and made Puerto Rico a territory.

In addition to the Spanish-American War and its aftermath, McKinley formulated an “open door policy” toward China, which called for equal trade with China among all countries. He also wanted to prevent other countries from carving up China. All this got very messy during what became known as the Boxer Rebellion, in which anti-colonial nationalists attacked Christians and foreign diplomats, including Americans. The United States joined in an eight-nation alliance to quell the rebellion, but as a result the ruling Qing Dynasty later collapsed. Oops.

McKinley also helped lay the groundwork for the construction of a shipping canal through Central America, by re-negotiating treaties with Great Britain and by setting up commissions to study the project. The canal was originally intended to go through Nicaragua, but McKinley also wanted a site in what became Panama to be considered.

Oh, and it was under McKinley that the United States annexed Hawaii. All this happened in McKinley’s first term.

Just like Rutherford B. Hayes and James A. Garfield, two of his recent predecessors, McKinley was a Republican from Ohio who had served in the Civil War. McKinley entered the war as an enlisted soldier and later became an officer, achieving the rank of Major. He fought in numerous engagements, including the Battle of Antietam. After the war McKinley was elected to Congress and focused on the issue of protective tariffs. After being gerrymandered out of office, he was elected governor of Ohio.

When he ran successfully for president in 1896 against Democrat William Jennings Bryan, McKinley did not travel the country to deliver speeches but rather conducted a “front porch campaign” in which various constituencies came to Ohio to visit him. It was a method of campaigning that had been previously employed by Indiana’s Benjamin Harrison, but McKinley was better at it, staging each front porch visit for maximum effect. The architect of his campaign, political ally Mark Hanna, distributed large volumes of campaign literature.

At the time the two biggest domestic issues were protective tariffs, and what to do about silver vs. gold as it related to the nation’s money supply. On the tariff issue, McKinley wanted to maintain protective rates but wanted the flexibility to negotiate reciprocity agreements with individual nations. On the metals issue, McKinley wanted gold but at the same time did not want to to shut out the silver advocates, who represented powerful constituencies. As his term in office went on and the nation’s economy improved, McKinley was able to soften his stance on tariffs and eventually sign legislation establishing a gold standard for the nation’s money supply once and for all.

Another domestic issue at the time was the problem of corporate monopolies, or trusts. A recent Supreme Court decision had struck down a law, and McKinley subsequently did very little to rein in trusts, saying federal legislation would likely be unconstitutional. It also appears that McKinley did very little if anything about civil rights, certainly nothing that was documented in any detail in the book.

Two future presidents played prominent roles during McKinley’s presidency. Theodore Roosevelt was McKinley’s Assistant Secretary of the Navy, but he resigned that post when the Spanish-American War broke out. Roosevelt founded the Rough Riders and fought in Cuba, then ran for governor of New York and won, before getting himself on the ticket in 1900 as the Republican vice presidential nominee. According to the book, McKinley did not want Roosevelt on the ticket but felt there was nothing he could do to stop him. McKinley also appointed William Howard Taft, who had been a circuit court judge, to be the civilian governor of the Philippines. In addition, future president Herbert Hoover was a mining engineer deployed to China.

Sadly, President McKinley was the victim of gun violence. He was shot twice at close range while visiting the Pan-American Exposition in Buffalo in September 1901, and he died a week later. The assassin was Leon Czolgosz, an anarchist.

Here are some additional facts about our nation’s 25th President:

As presidential biographies go, I found Robert W. Merry’s “President McKinley” to be insightful, with some very good analysis. As Merry freely admits, McKinley lacked creative thinking and was not the most charismatic of presidents. He did not have the force of personality of his immediate successor, Theodore Roosevelt. At the same time, to his credit, he did not make rash policy decisions or offer any bold pronouncements. (In other words, he did not tweet!) Yet Merry points out that despite McKinley’s lack of charisma, he usually achieved his goals in his own way, by listening respectfully to others, considering all sides of an issue before making a decision, and then using “incrementalism” to get what he wanted. But when it came to an aggressive foreign policy, were McKinley’s decisions good or bad? George Washington had famously warned our nation to avoid foreign entanglements, a policy that stood fast for the better part of a century. It’s therefore a bit shocking, in a way, to read how McKinley would point the United States on a much different path. He set the stage for the United States to take a leadership role in the enormous conflicts that would soon envelop the globe in two world wars. It’s what would later become, in what Merry calls in the subtitle to his book, “The American Century.”