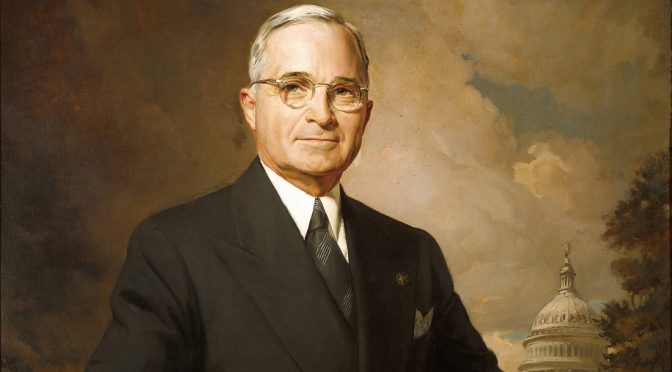 That famous photograph of Harry S. Truman holding up a newspaper with the erroneous headline “Dewey Defeats Truman” was taken in St. Louis the day after the 1948 presidential election. Truman became our nation’s 33rd President in April 1945, when FDR died in office at the end of World War II. In short order and on Truman’s watch, we defeated Nazi Germany and then Japan and brought our boys home. But Truman had not been very popular during his first four years in office. Public opinion polls, the press and his fellow politicians all projected that he was going to lose. When the early returns on election night indicated as much, the editors of the Chicago Daily Tribune (now the Chicago Tribune) printed their headline, which turned out to be wrong, giving Truman something to laugh about.

That fall, the man from Independence, Missouri, ever confident, had campaigned energetically across large swaths of the country, largely from the back of a train, and wherever he went he drew impressive crowds. Even when his train made whistle-stop stops in small towns in the wee hours, large masses turned out to hear this down-to-earth, man-on-the street kind of man. In many ways he was a man of the people. He knew what it was like to put in a hard day’s work. He had been a farmer, and a small business owner. He was a war veteran too. He was not a great orator, but he always spoke honestly and directly, without equivocation or trying to play both sides of the coin. Famously, he never blamed others.

Before he became Vice President and then President, Truman served in the United States Senate, where he developed a reputation as a “New Deal Democrat.” As President, he was even more progressive in many respects than FDR had been. He called for a higher minimum wage, and proposed increased federal spending for education, housing and public works projects. He also called for universal health care for all Americans. He called these proposals the “Fair Deal.” Truman was also better than FDR had been on civil rights. He laid the groundwork for the desegregation of the U.S. military, and he prohibited discrimination based on race for those applying for civil service jobs.

On the world stage, Truman supported the formation of the United Nations and NATO, and he pledged support to countries electing their own leaders in free elections. This policy, known as the Truman Doctrine, was intended as a check on the growing influence of the Soviet Union. Truman was also responsible for the Marshall Plan, which provided postwar economic aid to Western Europe, and the Berlin Airlift, which delivered food and other supplies to the Western part of Berlin that was surrounded by the Soviets. He recognized the state of Israel upon its founding in 1948.

It was also Truman who made the fateful decision to drop nuclear bombs on Japan. And he sent our troops to Korea, which would eventually cost countless thousands of American lives. What I did not realize before reading “Truman,” the masterful, thousand-page biography by David McCullough, is how much worse these things would have turned out to be, had it not been for the bespectacled man in the White House with a sign on his desk that said “The Buck Stops Here.” When Truman made a decision, it was only after careful deliberation about what he thought was best for the country. If that made him less popular, so be it.

It was toward the end of his time in office that Truman fired General Douglas MacArthur, thus plunging his already low public approval even lower. At the time this was shocking. But with the passage of time many, including me, believe that MacArthur was a dangerous demagogue who needed to be fired. It took a man like Truman to have the guts to dismiss him. The general had threatened to use nuclear weapons against China. And he interfered with Truman’s diplomatic efforts to bring the fighting in Korea to an end. By relieving MacArthur, Truman solidified one of the most important principles of our Constitution, which is civilian control of the military.

Another of Truman’s achievements was the formation of the Atomic Energy Commission, which is now the Nuclear Regulatory Commission, which put control of atomic weapons and energy in elected civilian hands, rather than the military.

When he left office Truman was unpopular, but over time his standing in the eyes of the public began to improve, to the point at which, today, when surveys are conducted, he usually ranks in the upper tier.

Truman was born in 1884 and hailed from Independence, Missouri. Today that’s part of the Kansas City metropolitan area, but in Truman’s day it was a completely different city. After graduating from high school he attended a business college but did not graduate. Instead he took a number of jobs, including railroad timekeeper and bank clerk. He also worked for his father on a farm in Grandview, Missouri.

When the United States entered World War I in 1917 Truman was old enough that he could have stayed home, but instead he enlisted and went to France as an officer, where his talents as a leader emerged. Truman served in the war with bravery and initiative. He fought in three battles and later received medals.

Upon returning from the war, he opened a men’s clothing store in Kansas City with a business partner, which was successful until an economic downturn forced it out of business. But Truman paid off his store’s debts over the course of many years.

After the store went out of business Truman entered politics, as an elected county judge, with the help of the Pendergrasts, who were a well-connected political family. Truman himself was not corrupt, but the Pendergrasts were involved in all manner of shady dealings and Truman’s association with them caused grief for him for decades to come. Being county judge was an administrative job, not the kind of judge who presides over trials. Truman was responsible for building roads. And rather than awarding the contracts to friends of the Pendergrasts, he hired construction crews who could actually do the work and do it well and under budget. The roads in that part of the state had never been better.

In 1934 Truman was elected to the United States Senate, and he was re-elected in 1940. His crowning achievement as a Senator was his work as chairman of the Committee on Military Affairs, which became known as the Truman Committee. The goal was to root out waste, fraud and abuse in the military. Truman and his fellow committee members held hearings and made visits to military bases. But there was no grandstanding the way many other Senate committees conducted themselves. The Truman Committee took its business seriously, ultimately saving our nation untold billions of dollars. In my view, the work of Truman and his committee proved to be absolutely vital to our country’s ability to achieve victory in World War II.

In 1944, when FDR ran for his unprecedented fourth term, he was in failing health and party insiders decided to dump Vice President Henry Wallace from the ticket because he was considered too far left, and replace him with Truman. According to the book, Truman did not want to do this but was strong-armed by FDR into going along with the plan. As fate would have it, Truman was Vice President for just 82 days before FDR died and he was summoned to the White House to take the oath of office.

Here are some additional notes about our nation’s 33rd President:

As I mentioned, I learned so much about Truman by reading the biography by McCullough. It was a pleasure to read this book, which is a comprehensive, cradle-to-grave narrative complete with helpful photographs, notes, index and bibliography. This was a long book that seemed short, and there is much, much more in it than mentioned above. There are some laugh-out-loud anecdotes, including one about a White House staff member fixing drinks for the first family and another in which Truman, while out on a walk, tells a tree that it’s doing a good job.

I followed up McCullough with a second book, “Harry S. Truman” by Margaret Truman, at 581 pages. I remember my father having a copy of this book in paperback. I found a used copy at the Strand Bookstore before the pandemic. I was slightly disappointed in Margaret Truman’s book. I thought she would write more about the family life. Instead she focused on policy, but the descriptions of meetings were so detailed that I suspected that Truman himself wrote the book, or large portions of it, to help settle scores. Just a hunch.

Anyway, if you’re interested in reading just one book about Truman and it’s between these two, I would recommend McCullough’s. As for me, someday I definitely want to read more about Truman. In my view, he was one of our nation’s very best presidents.