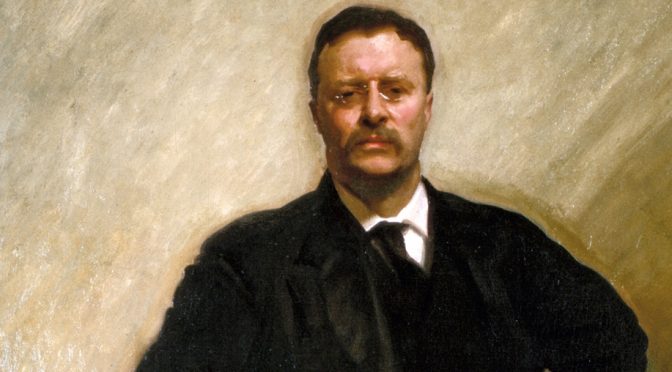 “Speak softly and carry a big stick” is one of many Theodore Roosevelt-isms that became part of the American vernacular. The way he saw things, the best way to keep our country out of war was to build up military strength, particularly naval forces. Theodore Roosevelt was a naval historian and had served as Assistant Secretary of the Navy. As president he added lots of warships to the U.S. fleet. He used this strength on the seas to help enforce the Monroe Doctrine, the longstanding U.S. policy that had been articulated by our fifth president, which said in essence that European powers had no business meddling in the affairs of the Americas.

When a dispute over unpaid debts owed by Venezuela caused England and Germany to set up a blockade, Theodore Roosevelt added his own twist to the Monroe Doctrine, what became known as the “Roosevelt Corollary.” Now, the United States would itself intervene in affairs of Latin American countries, to enforce legitimate claims by Europeans and to keep European forces out. This new policy kept Germany out of Venezuela, and it was used as justification for our own country’s intervention in what would become the country of Panama, which had been part of Colombia.

Oh, and one more thing: The often-overlooked “speak softly” part of the phrase was key to the equation, too. Theodore Roosevelt believed in subtle diplomacy. He did not want to antagonize or humiliate foreign powers or their leaders, especially the Kaiser of Germany or the Tsar of Russia. When Japan waged war against Russia, Theodore Roosevelt helped negotiate a peace settlement, which he did largely in secret.

Another Roosevelt-ism was the “Square Deal,” which was a phrase he used in calling both sides of a nasty coal miners strike to Washington to negotiate. Roosevelt was not necessarily on the side of the workers over management, but he did want them to have the right to bargain for better wages and working conditions. Roosevelt also sought to rein in the power of large market-stifling trusts, especially those controlling the nation’s railroads. He felt that big business was getting too large and powerful, and he wanted reasonable government oversight. 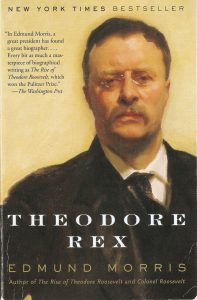 Also during this time Upton Sinclair wrote his famous book, “The Jungle,” which exposed unsanitary conditions in the nation’s meat processing plants. Theodore Roosevelt wanted federal legislation to bring in inspectors. He also called for worker protections, including an eight-hour workday.

One other famous phrase coined by Theodore Roosevelt, still used today, is that the presidency gives the officeholder a “bully pulpit.” But interestingly, the phrase might not have meant to Roosevelt what it means to modern ears. That’s because the word “bully” back then meant “nifty.” But Theodore Roosevelt could also be a bully, especially to get what he wanted. He knew how to pull all the levers of power to get more warships added to the budget, to get the Pure Food and Drug and Meat Inspection acts passed — and to get that long-anticipated canal built through Central America! The Panama Canal was not finished during Theodore Roosevelt’s presidency, but he got it started. (Never mind if some strings had to be pulled behind the scenes to facilitate Panama declaring independence from Colombia.) He visited the construction zone in person before he left office.

Theodore Roosevelt’s biggest legacy of all, though, was the conservation of our nation’s national resources. In creating more than 20 new national monuments and parks, he preserved 230 million acres of forests, lakes and canyons — including the Grand Canyon itself! Toward the end of his presidency, he summoned the governors of all states to Washington for a conservation conference.

Here are some additional facts about Theodore Roosevelt:

Theodore Roosevelt became our 26th president in September 1901, taking office after the assassination of William McKinley. He was a Republican from New York. In 1904 he defeated Democrat Alton B. Parker, also of New York, to win a full term in his own right. By 1908 he was at the height of his powers, but he decided not to seek another term. He instead threw his support to William Howard Taft, assuming his designated successor would carry on just the way he wanted him to.

“Theodore Rex” is the second in a three-volume biography by Edmund Morris. This book covers his presidency. The title derives from a quote from the novelist Henry James, who noted that the president had become something of an autocrat. I enjoyed “Theodore Rex” and thought it was very well written and certainly very comprehensive. But with all the names and places to remember it was a bit more challenging for me to get through than the first book in the series, “The Rise of Theodore Roosevelt.”

I’ve since moved on to the third and final installment by Morris, “Colonel Roosevelt,” which takes place after the spectacled one leaves office. That will be a book report for another day.

Listen to “Winter” — one of my favorite songs from a much under-appreciated album: