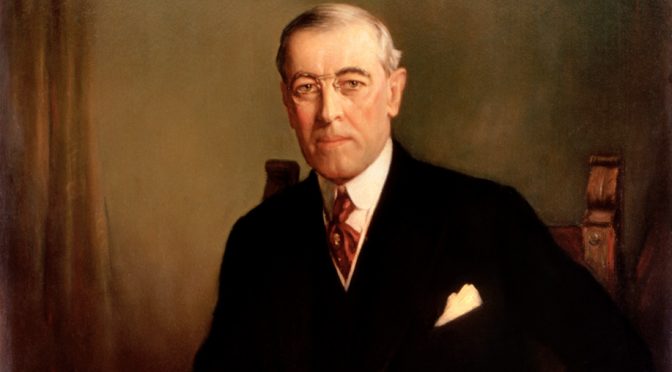 Woodrow Wilson was our nation’s 28th president. He was in office through all of World War I. He devoted the final years of his presidency — and his life, essentially — to fight for ratification of the Treaty of Versailles, which included the establishment of his League of Nations, a global body that Wilson hoped would prevent future war. Wilson’s fight for the treaty and U.S. entry into the League would ultimately prove to be unsuccessful.

His life story is told in “Wilson,” a biography by A. Scott Berg. (Thanks to cousin Traveler Blue for the gift!) At nearly 750 pages of text it’s quite a lot to get through. But it was an easy read. Photographs from the era enhanced the narrative. I enjoyed Berg’s writing style, and I appreciated that he expounded not only upon the subject’s many successes but also his many contradictions as a person and shortcomings as a politician. If there is one gripe I have about Berg’s “Wilson,” it’s that the author spent little time explaining how this wartime president interacted with the military during the war itself.

As the author explains, Wilson was a Southerner by birth and by disposition. He was born in Virginia, the son of a Presbyterian minister who moved the family frequently from congregation to congregation. Wilson grew up in Georgia, South Carolina and North Carolina. He worked as a college professor and later became president of Princeton University. In 1910 New Jersey’s Democratic Party bosses got Wilson to run for governor, thinking he would be their puppet. After winning the governors race, Wilson defied the party bosses by passing a number of reforms aimed at rooting out government corruption. Against long odds he also pushed through a bold progressive agenda for the state that included labor protections and educational reform. But this would all prove to be just a brief springboard to the Democratic presidential nomination in 1912.

This was the election in which Theodore Roosevelt challenged his Republican successor, William Howard Taft, for the GOP nomination and when he failed ran as a third party “Bull Moose” candidate. TR turned out to be a spoiler for the Republicans. Despite receiving less than 42 percent of the popular vote, Wilson won the election in an electoral-college landslide. He became the first southerner elected president since before the Civil War.

As president, Wilson’s domestic agenda was sweeping and progressive. It included a reduction of high tariffs, a personal income tax on the rich, an estate tax, antitrust legislation, labor protections, and farm subsidies. Wilson also signed into law legislation establishing the Federal Reserve. But Wilson’s record on civil rights for blacks was poor. He packed his Cabinet with southerners who sympathized with the Confederacy of old, and when these department heads decided to segregate the federal work force, Wilson went along with it. Wilson also allowed a screening of D.W. Griffith’s racist film “The Birth of a Nation,” which glorified the Ku Klux Klan, to take place in the White House.

During Wilson’s first term, World War I broke out in Europe. Wilson managed to keep the United States neutral for several years, despite Germany’s sinking of a number of ships carrying American passengers, including most famously the Lusitania.

In the election of 1916, Wilson faced off against Supreme Court Justice Charles Evans Hughes, narrowly defeating him by a handful of electoral-college votes. The popular vote was 49 percent for Wilson and 46 percent for his republican opponent. The outcome was in dispute for about a week after election day.

Wilson won re-election in 1916 under the slogan “He kept us out of war,” but by early the next year the Germans had escalated their attacks on transatlantic shipping. In April 1917 Wilson went to Congress and asked for a war declaration, stating famously, “The world must be made safe for democracy.” It would take the United States many months to mobilize for war, but when the Americans did finally enter the war it was in a big way. A draft was established, bringing close to 3 million men into the military! Black soldiers were drafted as well as whites, but they were segregated into different units for training and combat. Under the command of General Pershing, the United States turned the tide of the war in Europe, and by the end of 1918 an armistice was declared. But not before untold millions of soldiers had died, including more than 100,000 Americans. Countless millions more died in a deadly global influenza epidemic.

After the war Wilson traveled overseas to negotiate the peace treaty. Before talks started, he was welcomed by masses of people lining the streets to catch a glimpse of him. In Paris, he negotiated personally with French Prime Minister Georges Clemenceau, British Prime Minister David Lloyd George and others, for what would become the Treaty of Versailles. Wilson had brought with him as the basis for negotiations his “Fourteen Points,” which was his vision of how the world should be organized. The final and most important of these points was Wilson’s desire to form a League of Nations, which he got the others to agree to, a bit reluctantly. The French and British were more interested in punishing and humiliating the Germans for the war and wanted harsh remedies, including making the Germans pay reparations. Wilson wanted a more balanced approach, but having expended so much of his own political capital on getting them to agree to the League, he ultimately went with the plan. They also re-drew the map of the world, changing boundaries of many countries and creating new nations, mostly out of the former Austro-Hungarian Empire.

When Wilson returned to the United States with the Treaty of Versailles — which included the League of Nations — the Republicans in the Senate, led by Henry Cabot Lodge of Massachusetts, refused to ratify it. They might have approved a modified version had Wilson agreed to let them make changes, but instead Wilson went on a tour of the country, in which he intended to take his case directly to the American people. This would prove to be futile. He barnstormed via train, in which he gave dozens of speeches, mainly in the Western states. But on this trip his health deteriorated, and after a speech in Pueblo, Colorado, in September 1919, he suffered a complete physical breakdown. He was brought back to the White House, where several days later he had a debilitating stroke that left half his body paralyzed. He remained incapacitated for the rest of his presidency. Congress and the general public were not informed about the true extent of his condition.

Here are some additional facts about Wilson and his presidency:

Also during Wilson’s presidency, FOUR amendments to the U.S. Constitution were ratified:

Wilson left office in 1921, but he and his wife remained in the nation’s capital. He opened a law office with a partner but never had any paying clients. One of his last public appearances was to attend the funeral of his successor, Warren G. Harding. Wilson died in 1924 and was entombed in Washington National Cathedral. 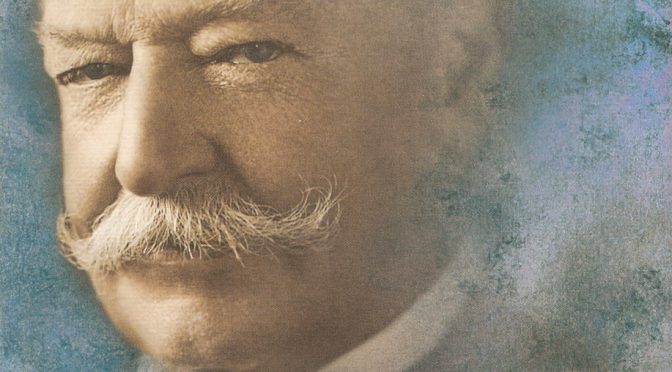 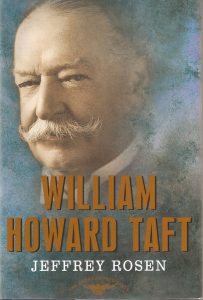