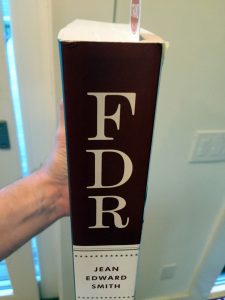 About a quarter of the way into this presidential biography by Jean Edward Smith, I came across a quote that I’m taking a moment to reflect upon. It’s the point in the book at which FDR is stricken with polio, in 1921, and he is hospitalized and unable to walk. According to the author, a journalist described the scene when friends visited FDR in the hospital. “Roosevelt gaily brushed aside every hint of condolence and sent them [the well-wishers] away more cheerful than when they arrived,” the journalist wrote. “None of them has ever heard him utter a complaint or a regret or even acknowledge that he had had so much as a bit of bad luck.” The author continues, “FDR saw it as his duty not only to appear in the best of spirits but to bolster the spirits of those about him.”

This passage made me think of my mother, also a polio survivor, who was born in 1932, the year FDR was elected president. I don’t recall my mother ever complaining, not even once, about how the virus had affected her own body, requiring her to use crutches and braces for the rest of her life. She sometimes would recall mistreatment by doctors and teachers at orthopedic school, but she never, not once, bemoaned her situation. To the contrary, she would always be optimistic. She would focus on the many things she could do, and she would often make light of her crutch, and the hand brake she used on her car, with a clever sense of humor.