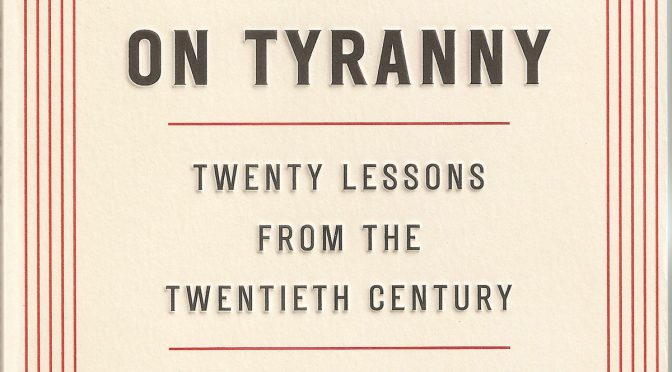 Could the unthinkable ever happen here in the United States? Could we all end up living in a dictatorship? If we are not careful, we just might. And it might happen sooner than anyone might expect. Sure, we live in a democracy today, with rule of law, freedom of the press and a constitution complete with checks and balances. But what if these safeguards fall away one by one? What then? 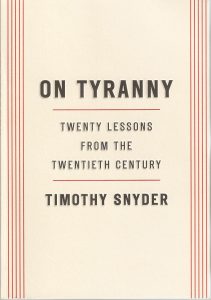 In his very brief yet very important book “On Tyranny: Twenty Lessons from the Twentieth Century,” Yale University history professor Timothy Snyder points out our nation’s Founding Fathers created a system with three separate branches of government specifically to prevent tyranny. The framers of our constitution studied the rise and fall of the ancient civilizations of Greece and Rome and took lessons from philosophers such as Aristotle, who warned of inequality, and Plato, who warned of demagoguery. The author also reminds us that many functioning democracies in 20th Century Europe devolved into dictatorships, after periods of political stability.

If you ask me, our own country today is headed down the wrong path, a dangerous path. I see many ominous warning signs. Consider that our president and officials in his administration openly lie about even the most easily disprovable of matters. He calls those working in media (which includes me) “enemies of the people.” There are no more White House press briefings. Not that it matters anymore, since the most recent press secretary — the daughter of a preacher, no less — was forced to admit under oath that she slandered a government official, one who was fired in an attempt by the president to obstruct justice as he openly admitted on national TV.

Also consider that half the cabinet secretaries now are “acting” secretaries, thereby circumventing the Senate’s constitutionally mandated confirmation process. This is not normal, nor it is acceptable. Yet it happens. Members of the administration flout the law with a smirk on their faces. They say down is up and right is left, that our allies are our enemies and our enemies are our friends. They call those seeking legal asylum in this country “animals” and treat them worse than animals. They ignore congressional subpoenas and defy court orders. All the while, they are cheered on by crowds of angry people worked into a hate-filled frenzy at political rallies. Yes, the gathering last night in North Carolina was a hate rally.

If you are as troubled by these things as much as I am, you might want to get a copy of this pocket-sized book. It’s brief, yet in my view very important. You could read it on the subway to work or even on your lunch break. It’s essentially just a collection of short proverbs. Among the lessons are things such as “Defend institutions,” “Beware the one-party state” and “Investigate.” These are words to live by, if you ask me.