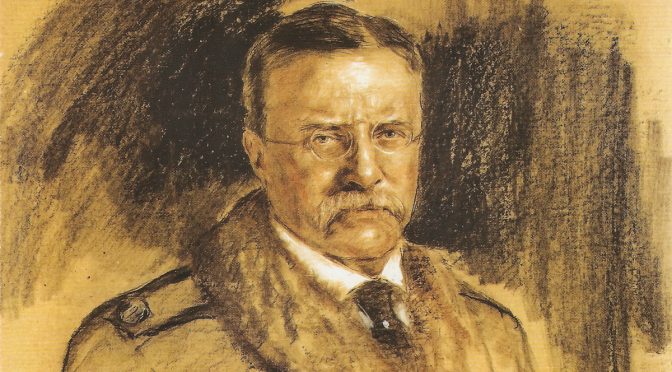 Theodore Roosevelt left office in 1909 and lived another 10 years. It was a momentous decade for the former President, as well as for the nation and for the world. Today’s book report is about “Colonel Roosevelt,” the third and final installment in an excellent, three-volume biography by Edmund Morris. After I write about the events described in the book, I am going to make two general observations and then share a personal reflection. But first, here’s what I learned about the third and final phase of Theodore Roosevelt’s life: 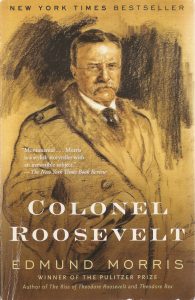 Immediately after leaving office Roosevelt departed for a hunting safari in Africa, followed by a grand tour of Europe in which he visited several major cities and gave scholarly speeches at universities. On the safari Roosevelt was accompanied by a large hunting expedition that included his second oldest son, Kermit. They covered many hundreds of miles and shot so much wildlife that it was considered excessive even back then. He killed hundreds of animals, including lions, elephants, zebras, antelope, giraffes, hippos and rhinos.

The trip lasted more than a year. While Roosevelt was still overseas King Edward VII of England died, and President Taft asked Theodore Roosevelt to represent the United States at the funeral. It was a momentous occasion in which the crowned heads gathered for the last time before World War I changed everything. At the time, the United States and France were the only countries that did not have royalty. During the events leading up to and after the funeral, which was the most elaborate event anyone could remember, Roosevelt met with pretty much all the various emperors, kings and queens of Europe — and for the rest of his life he would regale listeners with funny stories of what he would jokingly refer to as “the wake.”

By the time Roosevelt returned to the United States in 1910 he was perceived as an elder statesman (he was in his early 50s) and was greeted by large crowds of supporters. He received a ticker tape parade in New York City. He had been displeased with his anointed successor’s conduct in office and had an eye on running for President again. But by this time President William Howard Taft had strengthened himself within the Republican Party. Nevertheless, Roosevelt decided to challenge Taft for the Republican Party’s presidential nomination in 1912. At the convention that summer in Chicago, Roosevelt came close but lost the nomination to the incumbent president. When Roosevelt was defeated for the nomination, he did not accept defeat graciously but instead claimed that Taft’s men had “stolen” the nomination from him (tell me if this sounds familiar?) and he allowed his own supporters to literally storm out of the convention and form a third political party, the Progressive Party, which later became known as the Bull Moose Party.

As head of the Bull Moosers, Roosevelt campaigned extensively on a third-party platform of government oversight of big business, the breaking up of trusts and monopolies, the enactment of child labor laws, primary elections for party nominations and statewide elections for the selection of senators, and women’s suffrage. He also supported (unwisely) recall elections for judges and unpopular judicial decisions.

Toward the end of the campaign, while on his way to give a speech in Milwaukee, Theodore Roosevelt was shot! The would-be assassin was angered that someone would try for an unprecedented third term in office and decided to take matters into his own hands. The bullet went through Roosevelt’s folded-up speech and his eyeglasses case and lodged in his chest. But instead of going immediately to the hospital, as he should have, Roosevelt instead insisted that he be taken to the campaign rally, where he delivered his speech as scheduled, with blood seeping into his shirt. When he was finally taken to the hospital, later that night, doctors determined that it was too dangerous to remove the bullet, and Roosevelt walked around with it inside his body for the rest of his life.

The assassination attempt took place just weeks before the general election. Roosevelt came in second, losing to the Democratic candidate, Woodrow Wilson, who was New Jersey Governor and former president of Princeton University. Wilson had campaigned on a similarly progressive but much less radical platform than Roosevelt’s. Wilson received 42 percent of the popular vote, while Roosevelt got 27 percent and Taft 23 percent. In the Electoral College, it was a landslide for Wilson, who received 435 electoral votes, to Roosevelt’s 88 and Taft’s 8. After the election Roosevelt became something of a pariah among Republicans, because he opened a giant rift in the party that would take many years to heal. It was many years before Roosevelt and Taft would again be on speaking terms with each other.

In 1913 Roosevelt embarked on a tour of South America. He visited Brazil, Uruguay, Argentina and Chile, then back to Brazil. The purpose of the trip was a scientific expedition sponsored by the American Museum of Natural History, in which Roosevelt and his team of scientists and adventurers were to collect specimens. But before embarking on the predetermined itinerary, Roosevelt decided he wanted to do something more challenging. So he teamed up with a Brazilian explorer to travel down a then-unmapped river located in a remote section of Brazil. Kermit also was part of the expedition. The river was known as the Duvida, or River of Doubt. It would later be named after Roosevelt. It turned out to be a perilous and deadly journey. It took months for the expedition to even reach the river, it was that remote. The waters were filled with piranhas, and the jungle was inhabited by hostile natives who shot poisoned arrows. Many times they had to carry their boats over long stretches where the rapids were too rough to navigate, and there were many hardships. They lost their boats and had to carve canoes out of logs. There was a drowning and a murder among the crew. At one point Roosevelt injured his leg and was stricken with malaria, and he almost died. When he returned to the United States he published a book about the expedition, and he also presented lectures.

When war broke out in Europe in 1914, at first Roosevelt was careful not to criticize President Wilson but that did not last. Roosevelt thought that Wilson had not responded forcefully enough when Germany invaded Belgium, and his exasperation grew even more after the sinking of the Lusitania. He also felt that Wilson had not engaged in “preparedness” for war. When the United States finally entered the global conflict in 1917, Roosevelt asked Wilson and his secretary of war to grant him permission to raise a volunteer regiment. Wisely and correctly, Wilson denied Roosevelt’s request. The United States was instituting a draft and was amassing a modern, professional military. While Roosevelt was not able to serve as he so desperately wanted, all four of his sons enlisted in the war in various capacities. Sadly, in 1918 Roosevelt lost his youngest son, Quentin, a fighter pilot, who was shot down by German forces.

Theodore Roosevelt died in January 1919, shortly after World War I ended, at Sagamore Hill on the north shore of Long Island. Today the home is a national historic site, open to the public.

Here are a few more notes about Theodore Roosevelt:

As presidential biographies go, I thoroughly enjoyed all three of the volumes by Edmund Morris. My favorite of the trilogy was the first book, “The Rise of Theodore Roosevelt,” but all three were page-turners, complete with helpful maps and photographs. I felt that the author did a good job of presenting his subject as a complete human, with not only his triumphs getting attention but also his many faults and contradictions. One of the best things presented by Morris, in my view, is an epilogue to the final book, in which he describes all of the major biographies written about Theodore Roosevelt since his death and how these works influenced the general public’s perception of our nation’s 26th President over the decades. 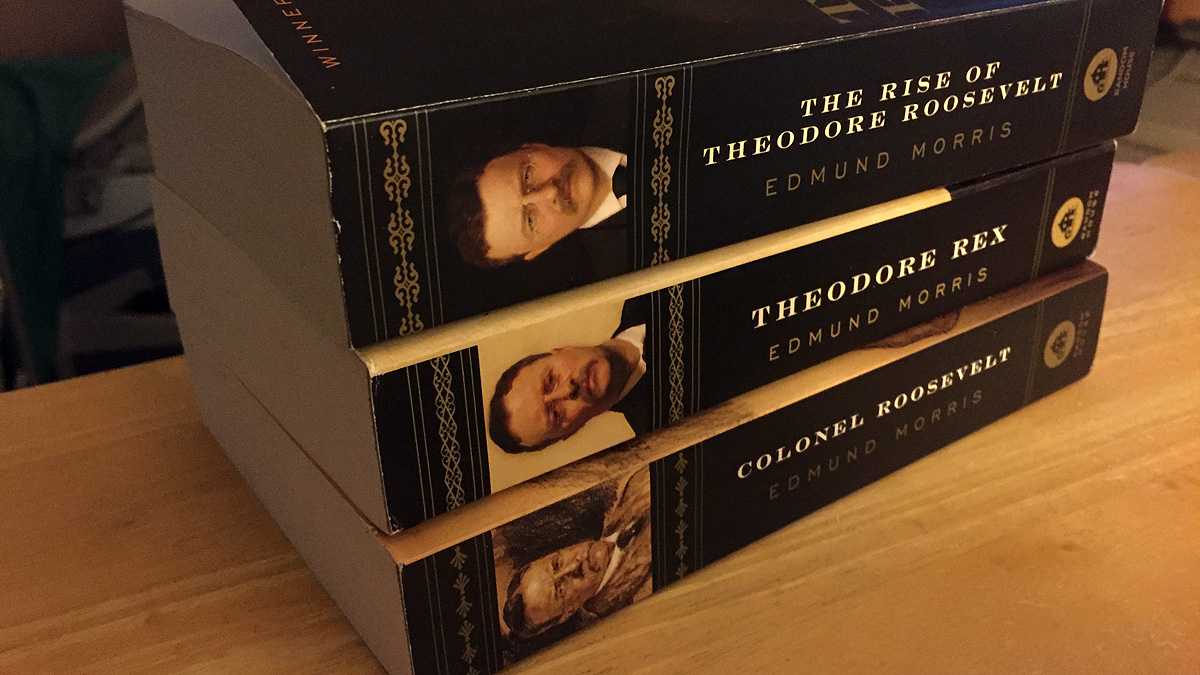 Now for my two general observations. First is that presidential assassinations at this time had, sadly, become rather frequent. There is not one American alive today who has lived through the assassination of more than one president, and many more who were not alive for even one. But at the time Theodore Roosevelt was alive, many Americans had experienced three! Theodore Roosevelt was six years old when Lincoln was killed in 1865 (he and his brother had watched Lincoln’s funeral procession through Manhattan from a window), he was in his early 20s when Garfield was killed in 1881, and then he was vice president in 1901 when McKinley was killed and he became president. In Europe, there were additional assassinations, including that of Archduke Franz Ferdinand of Austria, whose killing in 1914 sparked the onset of war, and then the execution in 1918 of Russia’s Tsar Nicholas II and his family as part of the Russian Revolution. So when Theodore Roosevelt was shot while campaigning for president in 1912, it must have been sad but not completely shocking.

My second observation is about the makeup of the American voting public. Up until this time, it had been all men. Mostly all white men at that. Theodore Roosevelt lived until 1919, but women were not allowed to vote until 1920! Think about that. Theodore Roosevelt was our nation’s 26th President, and he lived to see a 27th and a 28th elected. Yet each and every one of them was elected by men only. We are currently on our 45th President, so in all of our nation’s history women have been allowed to vote for less than half of our presidents. And if you combine that with the fact that in large parts of our country African-Americans did not get the right to vote until the 1960s, one thing is quite evident if you ask me: White male privilege is definitely a thing, and it’s been practically ingrained in our history!

And finally, I want to share a personal reflection, upon having read about the first century and a half (approximately) of our nation’s history, via these presidential biographies. I am grateful to have been born at a time in which going off to war was not expected of me. I’ve now read about the Revolutionary War, the War of 1812, the Mexican-American War, the Civil War, the Spanish-American War, and now World War I. Still to come will be World War II, Korea and Vietnam. I am so very glad that I was not a young man for any of these wars, and that we no longer have compulsory military service for the more recent wars in Iraq and Afghanistan. Not getting killed in war is something I am most grateful for.