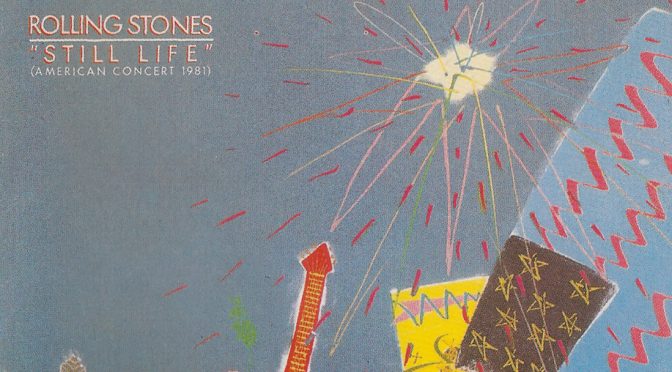 In 1981, the Rolling Stones were at the top of their game. They had a No. 1 album, “Tattoo You,” from which the first single, Start Me Up, was a smash hit on the radio. They also had videos running constantly on a brand new cable station called MTV. The band’s tour that year was arguably the biggest any rock band ever done to date, filling large outdoor stadiums and sports arenas, including the Pontiac Silverdome. (I happened to be just starting high school at the time, and was therefore too young to go to the show.) Opening acts for the Stones that tour included Journey and George Thorogood. With the exception of bass player Bill Wyman, the lads were all still in their 30s. Mick Jagger, trim and fit and with long hair, wore football pants and performed shirtless through much of the show. Then for the encore (usually the song Satisfaction, some nights Street Fighting Man), he would come out on stage wearing a colorful cape made of the British and American flags sewn together. He sang into a cordless microphone, which he stuffed into his crotch while running about the stage during the instrumental bits. 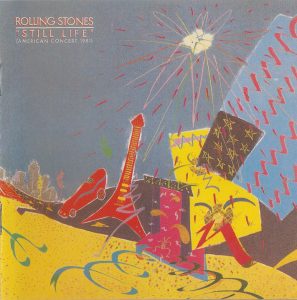 Documenting this tour was a live album, released the following year, called “Still Life: American Concert 1981.” This is not considered one of the best Rolling Stones albums, but it was the first one that I ever bought. I got it at Meijer Thrifty Acres. I remember the DJ Allison Harte talking about the album on WLAV when it came out and playing songs from it. I also remember that at first I was not hugely impressed. My biggest complaint was the album’s length. It was just 10 songs! For some reason I thought this was a recording of a complete concert. I wondered what kind of band would only play for 45 minutes? It was not until years later that I learned that the Stones played 25 or more songs on that tour, for close to three hours each night.

At some point I was in my room playing the record with all the lights off (as I did back then) and it was one specific moment in the song Twenty Flight Rock, where the other members of the band give a brief pause while Mick sings a line, that got me. I can’t explain it. It was something about the band’s ability to do that, to be so precise, so tight, that got me hooked. I learned later that Twenty Flight Rock was an Eddie Cochran song that the Stones were doing a cover version of. They also did a cover of the Smokey Robinson and the Miracles song Going to a Go-Go, which got airplay on the radio and on MTV. But it was the song Twenty Flight Rock, all one minute and 45 seconds of it, that initiated my love for the Rolling Stones.

Here are a few additional notes about the 1981 Stones tour and the “Still Life” album:

If you get the “Still Life” album, listen to the song Twenty Flight Rock and let me know what you think. Also listen to the song Let Me Go (from their 1980 album Emotional Rescue, which opens Side 2) and tell me if you can count the number of different ways Mick sings the word “hey” and how he turns that one word into a whole sentence just about every time he sings it. You might also get hooked on the opening song, Under My Thumb, or by Shattered, or by Let’s Spend the Night Together, which is played with guitars rather than on piano.

And then there’s their live rendition of Time Is On My Side, which is played and sung with such emotion. By this time the Stones had been performing so long together that his song had real meaning for them and their fans, yet I was just starting to get to know them.