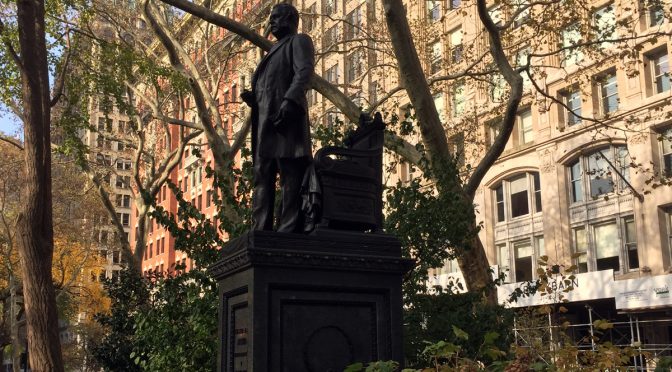 It’s not possible to tell the story of how Chester A. Arthur came to be our nation’s 21st President without talking about Roscoe Conkling, a powerful Republican Senator from New York. These were the days of “machine politics,” and nobody played the game better than Conkling. The way it worked was that a politician such as Conkling could dispense patronage appointments to friends and political allies, and in return these job-holders paid a portion of their salaries back to the coffers of those who had gotten them their positions. If one were running for office, he or his allies could promise future jobs in return for their support. The biggest job of them all — the plummiest of plum positions — was Collector of New York Customs, and during the Grant administration Conkling got Arthur appointed to that post. Arthur thrived, becoming a fat cat (he got literally fat) and getting very rich. He wore the finest clothes and lived in a fancy house at 123 Lexington Avenue (and on a personal note, that house is just three blocks away from where I live!).

Then along came President Rutherford B. Hayes, who got elected in 1876 after promising to break up this system. Hayes got into a huge fight with Conkling over how the New York Custom House was being managed, and Hayes eventually fired Arthur. By the time the Republican National Convention got underway in 1880, Conkling was seething mad and tried but failed to get Grant — a fellow “Stalwart” — nominated for what would have been an unprecedented third term. (Hayes had pledged not to seek re-election.) Another wing of the party wanted Senator James G. Blaine of Maine, but when neither Grant nor Blaine had the votes, they went with a completely different candidate, James Garfield! To placate the Stalwarts and in an attempt to balance the ticket ideologically, the delegates gave the Vice Presidential nomination to none other than Chester A. Arthur. Having never served in elected office before, Arthur was completely unqualified and everyone knew it.

Upon taking office Garfield picked a huge fight with Conkling over — you guessed it — the Collector job at New York Customs. In what would become an ill-fated move, Conkling resigned in protest and went to Albany, hoping to get immediately re-elected, and Vice President Arthur, who was seen as disloyal to Garfield and nothing more than Conkling’s lackey, followed him.

It was about this time that Garfield got shot, and, get this: The gunman turned out to be crazy office seeker who had been spurned for a job he thought he deserved! Not only that, but when they were taking him away to jail, he yelled out to everyone that he was doing this for the Stalwarts and not to worry, Chester Arthur would fix everything! It was the worst possible scenario for Arthur, who spent much of the subsequent weeks crying and fretting.

Garfield lived another two months, but Arthur stayed away from Washington because he did not want to be seen as too overly eager to seize power. Instead he stayed mostly in New York City and met frequently with Conkling. Everyone still saw Arthur as Conkling’s man, which is why it must have been very surprising to all, especially Conkling himself, when Arthur defied his onetime benefactor by not appointing Conkling’s choice to the Collector post. Later in his presidency, in a move that surprised everyone even more, Arthur would go on to sign a civil service reform bill into law. Not only that, but he enforced it with deputies who took the new law seriously.

These are some of the events described in “The Unexpected President: The Life and Times of Chester A. Arthur” by Scott. S. Greenberger. This turned out to be an excellent sequel to the Garfield book “Destiny of the Republic” by Candice Millard.

When he became president, Arthur comported himself well and struck the right tone, pledging to carry on in a manner that would be respectful to his murdered predecessor. During his presidency, Arthur strengthened the U.S. Navy. He vetoed a “rivers and harbors” bill that had been inflated with pork projects from legislators. Congress later passed the bill over his veto.

His record on human rights is mixed. When Congress passed an anti-Chinese immigration bill, Arthur vetoed it. Then when Congress passed a slightly milder yet still egregious bill, he signed it. When the Supreme Court stuck down a civil rights law during his presidency, Arthur called for new legislation in his annual message to Congress but did nothing more. Early in his career as a lawyer in New York City, Arthur represented a black woman who had been denied a seat on a streetcar and won her case, thereby helping desegregate public transportation in New York City. Everywhere he traveled, African Americans seemed to love him and many gave him handmade gifts.

When he was in office, Arthur received long letters from a young woman, Julia Sand, who had health problems and was living with her family in New York City. She offered Arthur plenty of advice on how he should behave, both politically and morally, and this advice must have had a profound effect on Arthur because he eventually paid her a personal visit. Before he died Arthur burned his papers, but many decades later his surviving relatives discovered 23 of Sand’s letters that Arthur had saved.

Here are some additional facts about Chester Alan Arthur:

In 1884 Arthur lost the nomination of the Republican Party to Blaine, who would go on to lose in the fall to Democrat Grover Cleveland. According to Greenberger, Arthur put up only a token fight for the nomination because he knew he was terminally ill with Bright’s disease and had known for some time, but he did not want this information to become public. After leaving office he returned to his home in New York City and died a year later, in 1886, of a stroke. He was 57. He was buried outside Albany.

It was striking that Arthur, a man who had been so closely associated with Conkling and the corrupt “machine politics” of New York, someone who was the unlikeliest of presidents, would be the one to initiate civil service reform. Today Arthur’s house at 123 Lexington is Kalustyan’s, a shop selling Middle Eastern foods, but just inside and behind glass, visible to passers-by, is a plaque commemorating the building’s place in American history. The plaque reads in part, “Here on September 20, 1881, at 2:15 a.m., Chester Alan Arthur took his oath of office as 21st President of the United States upon the death of President James A. Garfield, killed by a disgruntled office seeker … On January 16, 1883, President Arthur signed the U.S. Civil Service Act ending the spoils system an creating the American civil service.”

Just a few blocks away, also in Manhattan, at the northeast corner of Madison Square Park, stands a statue of Chester A. Arthur. And in the southeast corner of the same park stands another statue — of Roscoe Conkling.