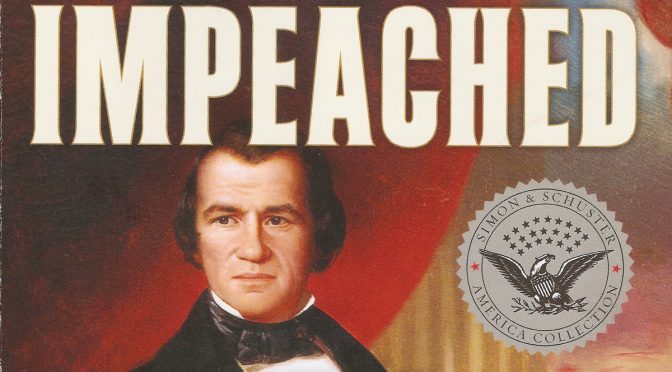 There were 11 articles of impeachment against Andrew Johnson, our nation’s 17th President, who went on trial in the Senate back in 1868. Articles 1 through 9 dealt with the Tenure of Office Act. Article 10 dealt with speeches Johnson had given in which he was accused of bringing disgrace upon Congress, and Article 11 was a “catch-all” that incorporated allegations from all the other articles.

Andrew Johnson was a Democrat who became president in April 1865, after President Abraham Lincoln, a Republican, was assassinated just one month into his second term and just five days after Lee’s surrender to Grant that effectively ended the Civil War. Andrew Johnson was not vice president during Lincoln’s first term. Hannibal Hamlin was. But leading up to the 1864 presidential election, the Republicans decided to dump Hamlin from the ticket in favor of Andrew Johnson, who was a Senator from Tennessee. Andrew Johnson had stood out from all the other Southern Democrats because he had stayed loyal to the Union during the war. The goal therefore was to have a “national unity” ticket. But Andrew Johnson did not bring unity to the country. Just the opposite. At the inauguration in March 1865, Lincoln delivered a beautiful address calling for our nation to heal. But Andrew Johnson appeared to be drunk. He was disrespectful, and he insulted cabinet members and embarrassed himself.

Andrew Johnson was also a racist to his core. He infuriated the Republican-dominated Congress by acting on his own rather than through the legislative process on Reconstruction. He wanted to welcome the rebel states back quickly, and he wanted to empower the former Confederates to continue their cruel oppression of those whom they had enslaved. He vetoed legislation passed by Congress, but most of his vetoes were overridden. Congress also passed, by overriding yet another veto, the Tenure of Office Act, which was the legal noose with which they intended to hang Andrew Johnson. The law stated that the president needed Senate approval to fire a cabinet secretary. Congress accused Andrew Johnson of violating the law when he tried to remove Edwin Stanton as secretary of war. Gotcha! It was a dumb law that was later repealed, but it formed the basis for what would become the impeachment of Andrew Johnson.

From the start, the trial itself turned into a bit of a circus. The Republicans were disorganized, and their legal case was ill conceived. The Democrats, meanwhile, used all manner of crazy tricks to delay and obstruct the proceedings. It got really ugly. They argued that Salmon P. Chase, Chief Justice of the United States, who presided over the trial, should not be allowed to make judicial rulings. And when witnesses were finally called, the Democrats objected to everything and the result was that after each question, the entire Senate had to vote up or down on whether or not a witness could answer. This made everything take forever. Opening and closing arguments also took forever. In the early days of the trial the galleries were packed with visitors. But the speeches were so long-winded that people quickly got bored.

All this is described in great detail in “Impeached: The Trial of President Andrew Johnson and the Fight for Lincoln’s Legacy,” a book by David O. Stewart. This is one of many books on the impeachment of Johnson. Other books cover the impeachment proceedings against Richard Nixon and Bill Clinton, and many other books cover the impeachment cases against all three. I really liked Stewart’s book on Johnson’s impeachment. I found it to be comprehensive, and even a bit suspenseful. The author shows that the trial was both a judicial proceeding and a political exercise. He also explains that impeachment is rooted in British law and had been included in the U.S. Constitution as a stopgap measure against tyrannical rule. (Note: At the time our founding fathers wrote the Constitution, there were no political parties!) I think the author of this book did a good job of placing the impeachment into the context of the times. Our country had never been so divided, and the whole matter was tragic. A quote from the book: “Andrew Johnson was an unfortunate president, an angry and obstinate hater at a time when the nation needed a healer. Those who opposed him were equally intemperate in word and deed. It was an intemperate time.”

Here are a few more notes on the impeachment of Andrew Johnson:

Before Johnson, the only other president to face the possibility of impeachment had been John Tyler. It would not happen again until Nixon, who resigned before a House vote on impeachment. Clinton was also impeached but was acquitted in his Senate trial, which was presided over by Chief Justice William Rehnquist. Clinton faced two articles of impeachment, for lying to a grand jury and for obstruction of justice.

Impeachment might happen again. In my view, having read about the trial of Andrew Johnson and how that all unfolded, getting to two-thirds (67 votes) in the Senate to oust the current president seems far from likely.