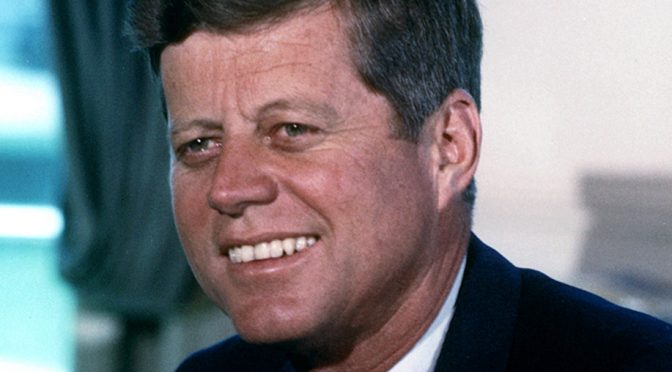 John F. Kennedy, also known as JFK, also known as Jack Kennedy, was our nation’s 35th president. Among his most lasting achievements were the founding of the Peace Corps and his fostering of the space program. He also prevented nuclear annihilation. He was a war hero. He was young and energetic and had movie-star good looks. His wife, Jacqueline Bouvier Kennedy, also known as Jackie, and later Jackie O, was enormously popular in her own right. Kennedy was the immediate successor to Dwight D. Eisenhower. He was a Democrat. He defeated then Vice President Richard M. Nixon in the presidential election of 1960. Three years later, in an event that shocked the world, Kennedy was shot to death in front of thousands of people in Dallas. His assassination took place on this day (Nov. 22) in 1963. Upon JFK’s death, Vice President Lyndon Baines Johnson was sworn in as President.

Today’s book report is about “An Unfinished Life — John. F. Kennedy: 1917-1963,” by Robert Dallek. This biography, at 718 pages of text, focuses mostly on the Kennedy presidency. There is almost nothing in the book about the assassination itself, although there is plenty of information about the many issues Kennedy was wrestling with in the weeks and months leading up to his trip to Texas. The author speculates about what kind of president JFK might have become had he won re-election to a second term. 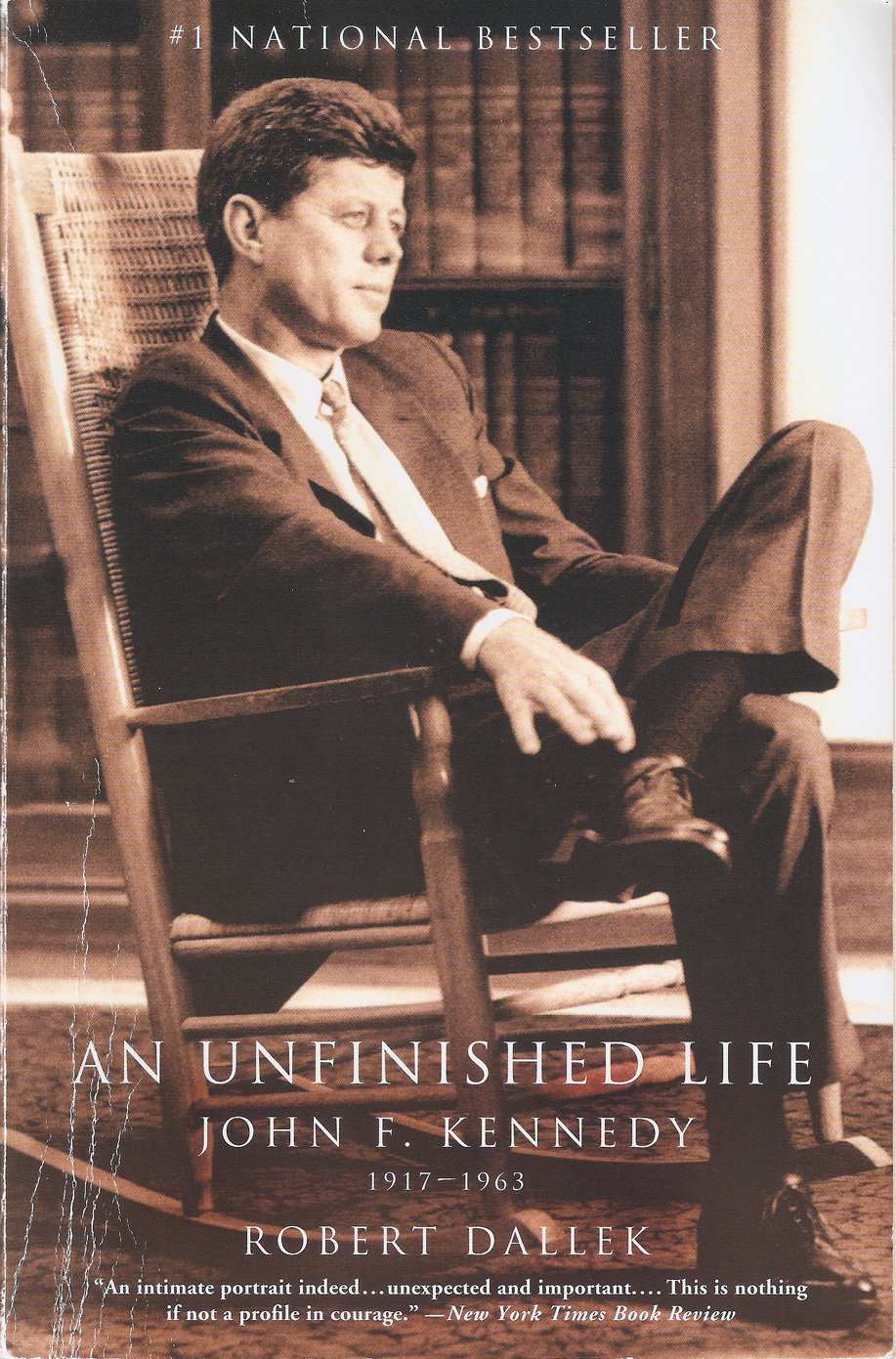 As president, Kennedy faced a number of domestic and international challenges, including the economy, civil rights, dealing with the Russians in post World War II Europe, and the immense challenges that the existence of nuclear weapons posed to our country and to the world at large. It was the height of the Cold War, and Kennedy clashed with Nikita Kruschev, the leader of the USSR.

Both his biggest failure and his greatest success while in office involved Cuba. Shortly after Kennedy took office, he authorized a covert operation intended to remove Fidel Castro from power. The plan, which had been formulated during Eisenhower’s presidency, was to use CIA operatives and anti-Castro Cuban exiles to invade the island, where they would presumably be greeted as liberators (sound familiar?), thus causing Castro to be toppled from power. Of course this did not go as planned. What became known as the Bay of Pigs Invasion turned into a massive disaster, ultimately strengthening Castro’s hand. Kennedy could have escalated matters by ordering a full-scale military assault, as many of his military advisors had presumed would happen, but to his credit Kennedy accepted the loss and took responsibility for it.

The following year, in October 1962, the Soviet Union began installing missiles in Cuba that they could have used to strike the United States with nuclear weapons. Some of Kennedy’s military advisors wanted us to bomb Cuba and ask questions later, or to launch a ground invasion. Anyone who has seen the 1964 Stanley Kubrick film “Dr. Strangelove” might remember how crazy for war some of the military chiefs were. According to Dallek, at least one of them was drawn from real life. Instead of a belligerent military response, which in all likelihood would have sparked all-out nuclear war, Kennedy decided to use a naval blockade, which he called a “quarantine,” along with diplomacy, which turned into quite forceful diplomacy involving the United Nations, to get the missiles out of Cuba. It worked. In my view, it was Kennedy’s astute, intelligent and well-reasoned leadership during the Cuban Missile Crisis that prevented unspeakable death and destruction.

The book starts at the beginning of the 35th president’s life. As we learn, John F. Kennedy was born 1917 to a famous and wealthy family. Both of JFK’s grandfathers had been prominent in local and state politics. JFK was the second oldest of nine children of Joseph P. Kennedy Sr. and Rose Fitzgerald Kennedy. Joe Sr. was a successful businessman who became immensely wealthy through many ventures as well as by investing in the stock market. He was also a prominent Democrat. President Franklin D. Roosevelt named him the first chairman of the Securities and Exchange Commission and later appointed him ambassador to Great Britain. In 1938, as Britain was appeasing Hitler, all 11 Kennedys went to London, and they were there when Nazi Germany invaded Poland and World War II broke out. But Joe Sr. was an isolationist, and when he said some things in the press that were not in keeping with U.S. policy at the time, FDR recalled him.

Back home, after Kennedy graduated from Harvard in 1940, he attempted to join the U.S. Army as an officer, but he was disqualified due to health reasons. The following year, he tried again, this time with the Navy. His father pulled some strings to get him in despite a bad back, and JFK eventually assumed command of various PT Boats. In 1943 he was commanding the PT-109 in the Solomon Islands in the Pacific theater when it was struck and destroyed by a Japanese ship. He led himself and the 10 surviving crew members to safety, but it took many days for them to be rescued. At one point Kennedy swam 2 miles through the open ocean to seek help for his men, despite what must have been excruciating physical pain, not to mention extreme hunger and thirst. He was later honored with various medals, including a Purple Heart, for his service.

After the war Kennedy briefly became a newspaper correspondent before entering into politics. He first ran for Congress from Massachusetts in 1946, with the backing of his father, who poured massive amounts of cash into this and subsequent campaigns. Kennedy served three terms in the House. Then, in 1952 he was elected to the United States Senate, defeating Henry Cabot Lodge Jr. He was re-elected to the Senate in 1958 before running for President in 1960.

Here are some additional revelations from this book. Before and during his presidency, Kennedy experienced many health problems that were not disclosed to the American people. When he was still in college he was frequently hospitalized. Today many of his health problems have been attributed to Addison’s disease, which is a disorer of the adrenal glands, however JFK’s health issues were much more complicated than that. According to the book, he experienced lifelong gastrointestinal problems and chronic back pain. He was frequently medicated with steroids and other drugs. Other revelations in the book involve Kennedy’s sex life. Before and during his marriage to Jackie, JFK was a womanizer. He had many conquests. One of his many affairs might have been with Marilyn Monroe. The also author says that the infamous White House taping system, which would later result in Nixon’s downfall, was installed by Kennedy! There were even missing tapes, he says, speculating that they might have been destroyed to cover up dalliances with Marilyn, or perhaps a secret plot against Castro, or perhaps details of JFK’s health problems.

More notes about JFK, his family and his presidency:

As I mentioned the Dallek book does not delve into the assassination itself, but each year around this time a number of TV specials about that day in Dallas are shown on the Smithsonian Channel, the History Channel and other channels. I’ve learned a great deal from many of these documentaries, and they stand in stark contrast to the 1991 Oliver Stone movie “JFK,” which in my opinion is total rubbish.

One much more worthwhile film about Kennedy is “Thirteen Days,” from 2000, with Kevin Costner. Although the movie is a bit off in some of the details and personnel involved, in my opinion it does a good job of portraying the skill and thoughtfulness that JFK used to avert nuclear war. It was, in my opinion, Kennedy’s finest hour.