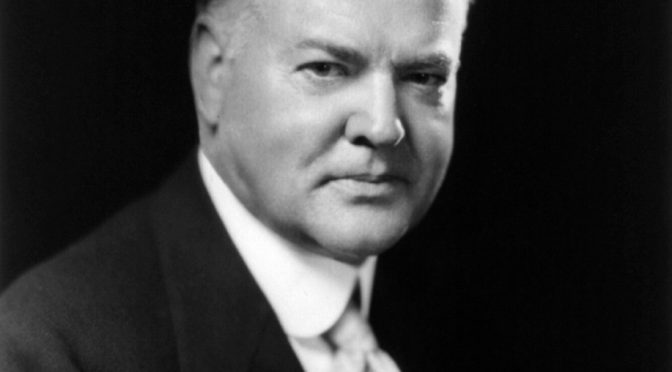 He tried so hard to pull our country out of the worst economic disaster it ever experienced before or since, what would become known as the Great Depression. Even before the Wall Street crash of October 1929, which came just months after his inauguration, Herbert Hoover knew the stock market was a speculative bubble. He had taken steps to address this, but few would listen. After the crash he immediately called captains of industry to the White House and got them to promise not to implement massive layoffs or pay cuts. He also persuaded union leaders to agree not to stage any labor protests or strikes during this time of crisis. His efforts worked for a while, but soon it became evident that this was more than just a cyclical recession.

It was really a problem with worldwide dimensions. It was brought about by factors that included a massive global trade imbalance, poor international monetary policy, and how governments were maintaining or not maintaining a gold standard. It was all complicated by the massive debts and reparations owed after the war in Europe. The depression was much worse overseas, and in Germany the government was about to collapse. Here at home, Hoover got Congress to agree to a moratorium on German debt and reparations payments. He also called for private relief through organizations like the Red Cross. And he encouraged state and local governments to implement local infrastructure projects to help spur employment.

But when Britain abandoned the gold standard it set off another round of misery here, causing massive bank failures. Hoover gathered the nation’s top banking executives to Washington to establish what would become the Reconstruction Finance Corporation (RFC), which was an effort designed to keep credit flowing and banks liquid. Finally, thinking that the economy was soon to improve, Hoover set out to raise taxes and cut spending in an effort to balance the federal budget and thus demonstrate that the government was on solid footing.

When Hoover implemented these measures, the economy would perk up for a few months at a time, only to fall off again. There seemed to be no end in sight to the misery. It’s therefore no surprise that Hoover became a one-term president. In the election of 1932, New York Governor Franklin Delano Roosevelt beat Hoover decisively, winning 472 electoral votes vs. 59 for Hoover, and getting 57.4 percent of the popular vote to Hoover’s 39.7 percent. 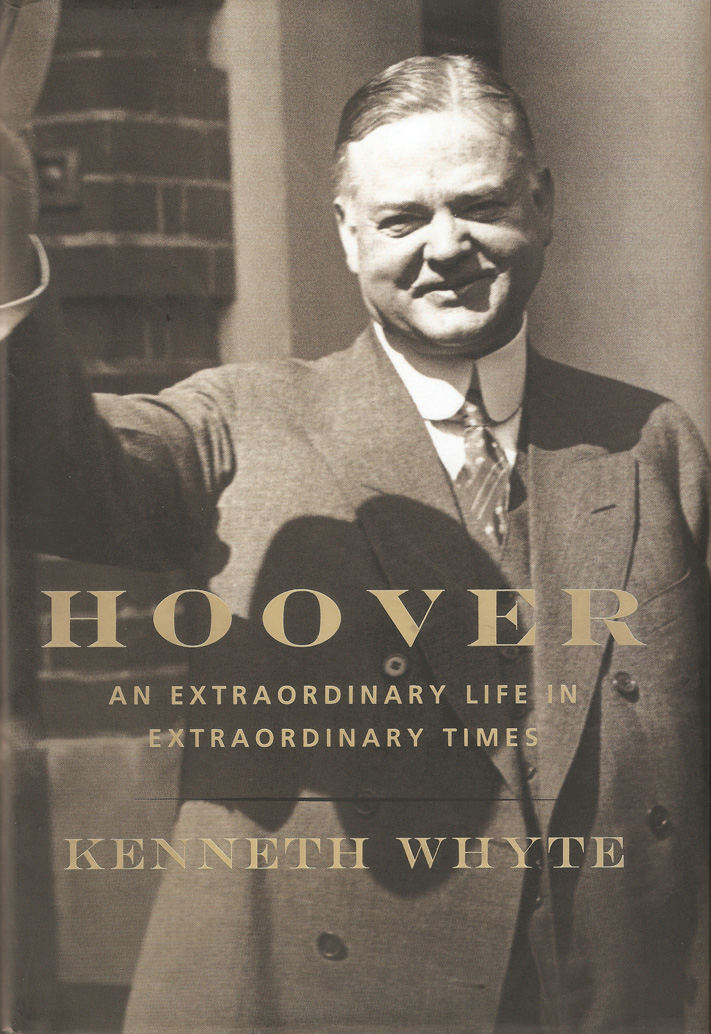 Today’s book report is on “Hoover: An Extraordinary Life in Extraordinary Times” by Kenneth Whyte. It’s a fitting title for someone who was active in public life not only during the Great Depression, but also during both World War I and World War II, and the start of the Cold War. At more than 600 pages with thoughtful insight and analysis, I found this book a pleasure to read. It’s certainly one of the best presidential biographies I have yet encountered. I learned so much, not only about Hoover but also about the momentous times in which he lived.

Elected to our nation’s highest office in 1928, Herbert Hoover was our nation’s 31st president. He was a Republican who had never before held elective office. But he was no stranger to the federal government, having served in three previous administrations.

A native of West Branch, Iowa, Hoover was the first president born west of the Mississippi. He was also the first Quaker to be elected president. He was orphaned when he was just 9 years old and was sent to live with relatives in Oregon. His early childhood trauma likely affected his emotional development, leading to lifelong social awkwardness and an inability to connect with others on a human level. He didn’t like “glad handing” or kissing babies as so many other politicians do. He was among the first students to attend Stanford University, where he studied engineering. After college he got a lucrative job working for a British mining company, and he traveled to Australia and China to develop mines. He was really good at this, and he made tons of money for the company and for himself. He eventually settled in London, where he started his own firm.

In business Hoover had developed immense organizational and managerial abilities, and when war broke out in Europe he put these talents to use, first by helping Americans stranded abroad get home safely, and then later by organizing massive humanitarian relief for the people of Belgium, who were starving. After the war, Hoover joined President Woodrow Wilson’s delegation to the Paris peace talks and later organized more humanitarian relief, this time for all of Europe. President Warren G. Harding, who was elected in 1920, gave Hoover a cabinet post — Secretary of Commerce — and he stayed on in that post under Calvin Coolidge after Harding died in office.

Hoover was an excellent commerce secretary. In an effort to streamline business activity and eliminate waste, he gathered and published immense amounts of data and called for improvements to the nation’s infrastructure as well as preservation of natural resources. He helped get the Radio Act of 1927 signed into law under Coolidge, which regulated and helped organize the nation’s airwaves. Importantly, Hoover also set out to standardize construction materials and consumer products, everything from screws to bricks to automobile tires and even baby bottles. According to the book, Hoover’s standardization of home building materials reduced the price of a new house by a third, making home ownership more achievable for many Americans.

These initiatives all fit in with Hoover’s worldview, that government should help foster business growth and stability without intervening directly. In other words Hoover was not a laissez faire capitalist, nor could be he called a socialist. He was rather a champion of a so-called “third alternative.”

When a great flood of the Mississippi River caused widespread devastation in 1927, Hoover performed the duties of what a good FEMA director would do today, organizing relief efforts and saving many lives and livelihoods. He relied in large part on private donations.

In 1928, after Coolidge declined to seek another presidential term, Hoover received the Republican Party nomination. He won in a landslide, receiving 444 electoral votes to 87 for the Democratic nominee, Al Smith of New York. The popular vote in 1928 was 58.3 percent for Hoover and 40.8 percent for Smith.

When Hoover began his term of office the first thing he did was get in a huge fight with Congress — over tariffs! The Republicans controlled both houses, but Hoover lacked the political savvy and the inside connections needed to get legislation through. In the midterm elections of 1930, the Democrats gained seats in the House but the Republicans maintained control. Then late in Hoover’s term several Republican representatives died, causing power in the House to flip to the Democrats. Interestingly, when this happened Hoover was able to get legislation passed more easily.

Hoover was president during the Prohibition era. Early in his presidency Hoover convened a commission to study the issue, but when it recommended that the Volstead Act, which was the federal government’s enforcement mechanism against booze, be revised, and Prohibition itself be revisited, Hoover did not act. To his credit, Hoover had wisely called Prohibition an “experiment” in the 1928 campaign, but at heart Hoover was more of a “dry.” In the election of 1932 the Democratic Party platform called for outright repeal of the 18th Amendment, and FDR campaigned on repeal. This might have contributed to FDR’s lopsided victory over Hoover.

As a former president, Hoover lived for many more decades and continued to serve his country. He chaired two Hoover Commissions, one under President Truman and one under President Eisenhower, to help eliminate redundancies in the administrative branch and to help make the federal government run more efficiently.

After leaving office Hoover lived for a time in a large house in California, but he eventually moved to New York City, living in a suite at the Waldorf Astoria Hotel. He died in 1964 at age 90, outliving both FDR and JFK.

Also after his presidency, Hoover spoke out publicly and privately against FDR. In my view, some of Hoover’s criticism of his successor was sour grapes, but in other respects it was warranted. Hoover thought that FDR should not have let the United States recognize the Soviet Union, and he was infuriated that so many people ended up living under an iron fist after the second world war. Hoover also was troubled by the New Deal, thinking that the federal government was getting too big and interfering too much in industry. According to the book, the elder statesman Hoover became the spiritual godfather of the modern conservative movement, influencing thinkers such as William F. Buckley Jr.

Nevertheless, after the Depression Hoover was branded a failure, and that sentiment lasted for many generations. This may or may not have been fair. I tend to think that it was unfair. In 1932 and in his subsequent presidential campaigns, FDR and his Democratic Party had been especially nasty toward Hoover. As part of a Democratic Party smear campaign, shantytowns during the depression were dubbed Hoovervilles — a term that continued to be used even during FDR’s many years of being president during the Depression.

This blaming the Depression on Hoover even carried over into popular culture. For example, the Broadway musical “Annie” features a song called “Thank you Herbert Hoover,” which is a sarcastic thank you. And in the popular song “I’m Still Here” by Sondheim, from the show “Follies,” a woman of a certain age reflects on her life, remembering living through the Depression and many other ups and downs. “I lived through Herbert and J. Edgar Hoover, that was fun and a half,” she sings. “When you’ve lived through Herbert and J. Edgar Hoover, everything else is a laugh.”

It must have been difficult to be Herbert Hoover, especially during the FDR years. He was unpopular, yet, according to the book, when everyday Americans encountered him they wanted to shake his hand. Sadly, Hoover was not emotionally capable of reciprocating these affections.

Here are some additional facts about Herbert Hoover:

And that’s Herbert Hoover. Before reading Whyte’s excellent biography, I knew almost nothing about the man. I found his life to be absolutely fascinating. As the author pointed out, Herbert Hoover knew every president from Theodore Roosevelt to Richard Nixon and served under five of them, both Democratic and Republican, in addition to his own term in the White House.

Even more importantly, the author estimates that during his lifetime Hoover saved 100 million lives, through his humanitarian work during and after World War I and later after the Mississippi flood of 1927. That’s something to admire. I am so glad I took the time to learn more about this important American and his many achievements.