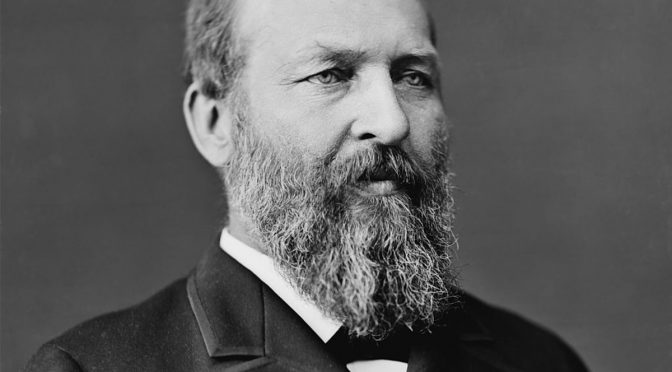 Today’s book report is about James A. Garfield, the 20th President of the United States. A Republican from Ohio, Garfield was elected in 1880. A few short months after his inauguration he was shot by a crazed lunatic. He died two months later. 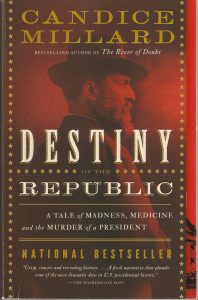 Back at this time, politicians doled out jobs to their political friends under the patronage system, and Garfield’s killer, Charles Guiteau, was among hundreds of job seekers who had been hounding the president and his cabinet secretaries looking for an appointment. After getting a firm no from Garfield’s newly appointed Secretary of State, James G. Blaine, Guiteau snapped and bought a gun. He stalked Garfield for weeks before catching up with him at a train station. He fired twice, with the first shot grazing Garfield’s shoulder and the second entering his back. This happened right in front of Blaine and two of Garfield’s sons. He was on his way to join his wife, Lucretia, who was recovering from an illness of her own, on a vacation. Garfield probably could have survived the shooing, but, sadly, he received poor medical care. A number of doctors — including Dr. Doctor Willard Bliss (the doctor’s first name was Doctor) — poked the gunshot wound with unwashed fingers and unsterilized instruments. This resulted in bacterial infection, which ultimately killed Garfield.

Garfield had been a surprise presidential nominee in 1880, and his vice presidential running mate, Chester A. Arthur, was an even bigger surprise. At the Republican national convention that year, there was a rift. On one side were the “Stalwarts,” including the powerful Senator Roscoe Conkling of New York. The Stalwarts liked the patronage system and wanted it to continue. The Stalwarts were prepared to nominate Ulysses S. Grant, who would return from retirement to run for an unprecedented third term. Meanwhile, the “Half Breeds” advocated for reform and were largely lined up behind Blaine. Garfield had spoken in favor of yet another candidate, John Sherman. When none of the candidates could get the necessary votes to clinch the nomination, many of the delegates switched their votes to Garfield, who got the nomination on the 36th ballot. To placate the Stalwarts, they nominated Arthur (Conkling’s man) for Vice President. These were the days before state-by-state presidential primaries, when a “dark horse” could emerge as a nominee out of a “smoke-filled room.”

Garfield’s immediate predecessor, Rutherford B. Hayes, had tried to end the patronage system but ran into fierce opposition from powerful senators like Conkling. Hayes had fired Arthur, Conkling’s beneficiary, from the Collector job at the New York Custom House, and the dust had not yet settled. When Garfield came into office it was not clear what course he would take, but it soon became apparent when he ignored Conkling’s advice for cabinet appointments. The dispute got even nastier when Garfield appointed his own man as Collector of the New York Customs House.

In what they thought would be an effective power play, Conkling and his fellow New York Senator, Thomas C. Platt, then resigned, assuming they would be immediately re-elected by the New York State legislature, in a show of solidarity and thus prevailing over Garfield, but their plan backfired. Conkling and Platt were not re-elected by the New York legislature and were humiliated, and Garfield emerged triumphant. In those days Senators were elected by state legislatures, not by direct popular vote as they are today.

All of these events and much more are detailed in “Destiny of the Republic: A Tale of Madness, Medicine and the Murder of a President,” by Candice Millard. This book was a popular best seller, and I found it an absolute pleasure to read.

Here are some additional facts about James A. Garfield:

Millard’s book is not a typical presidential biography. It focuses more on the assassination and events leading up to it. The book does not offer much on Garfield’s upbringing, and even less on his service during the Civil War. And I would like to know more about what was going on behind the scenes while Garfield was incapacitated. Nevertheless, the book still offered a great deal of information, and I found it to be a page-turner that I enjoyed immensely. The author weaves in the story of Garfield with his assassin, as well as many other key players in the drama. We also learn about Alexander Graham Bell, who had just invented the telephone and who was brought in to the White House to help locate the bullet with a new experimental device.

Also receiving attention is Joseph Lister — whose medical research on sanitary surgical techniques were completely ignored by Garfield’s doctors and ultimately led to his death. Sadly, that kind of head-in-the-sand stupidity still exists today. Just consider the dire warnings from scientists over greenhouse gas emissions and how they are contributing to the global climate crisis, our country’s current political leadership and the recent withdrawal from the Paris Climate Accords. 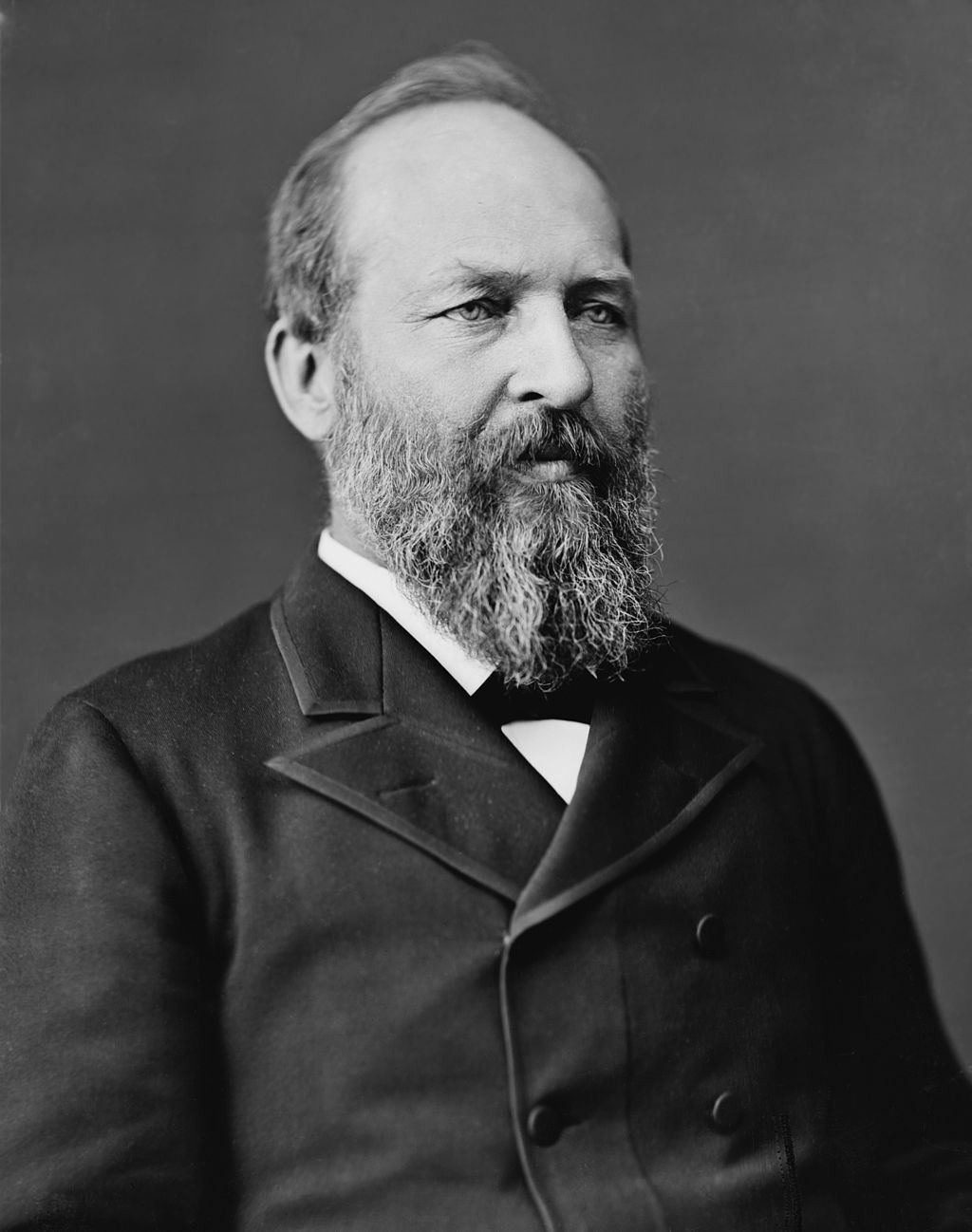