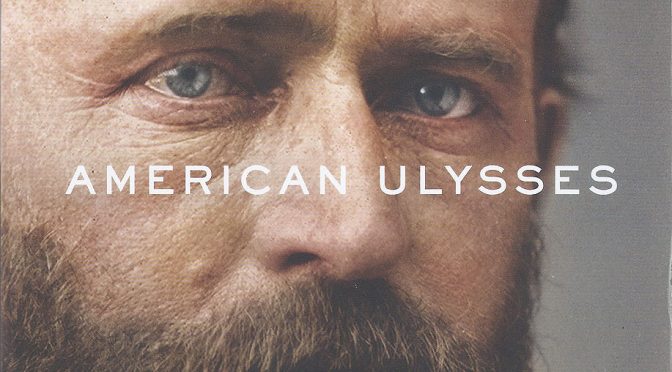 It was what General Ulysses S. Grant did after the battle of The Wilderness that changed things. By May 1864, the Civil War had been going on for more than three years. The loss of life to this point had been more than anyone could have imagined. It was already apparent that the South was not going to be able to win the war, but the Confederates were trying to drag the war on longer, hoping to make the conflict so costly to the North that the voting public would tire of the war and throw Lincoln out of office, to be replaced by someone who would end the war. The stakes were enormous. More than just the preservation of the Union was at stake. Ending the war at this point would have re-enslaved the 3.5 million people who had been freed on January 1, 1863, by Lincoln’s Emancipation Proclamation.

By this point Lincoln had already replaced his top generals numerous times. McClellan, Burnside, Hooker and Meade had all failed to prosecute the war with the urgency and vigor that Lincoln wanted. After Grant achieved key victories for the Union at Vicksburg and Chattanooga, Lincoln summoned him to the nation’s capital and named him Lieutenant General. Grant was the first since George Washington to hold the rank.

The Wilderness was Grant’s very first battle after being put in charge of all Union armies and his first faceoff with Confederate General Robert E. Lee. It did not turn out well for the Union. But unlike his predecessors who had all retreated north after suffering large casualties in battle, Grant decided to move his army farther south. There was to be no turning back this time. Grant was not one to make excuses, to blame others or to give up. Final victory was still a long way off, but Grant knew it was coming. It came the following spring, when Grant accepted Lee’s surrender at the home of Wilmer McClean, in the town of Appomattox Court House, Virginia.

After the war Grant stayed on as commander of the U.S. Army, serving under President Andrew Johnson. Grant served briefly as Secretary of War during Johnson’s dispute with Congress over the Tenure of Office Act. He was elected President in 1868 and then re-elected in 1872 by wide margins both times in both the popular and electoral votes. He never campaigned. In his first inaugural address, he called for the ratification of the 15th Amendment granting blacks the right to vote, and he spoke out for the rights of Native Americans. He stumbled early on with less-than-ideal cabinet appointments. Grant himself was not corrupt, but some of his cabinet secretaries became involved in various scandals, which got worse in his second term. One of Grant’s best picks was Hamilton Fish as Secretary of State, whom grant had plucked out of retirement. Fish had been governor of New York and a United States Senator and turned out to be an excellent Secretary of State. He served through both of Grant’s presidential terms.

During the late 1860s the Ku Klux Klan emerged. Grant recognized the KKK immediately for what it was — a domestic hate group intent on using terrorism to prevent blacks from exercising their rights as citizens to vote. Grant formed the Justice Department and directed it to fight the Klan. He went so far as to declare martial law and to use federal troops in parts of the South to enforce voting rights.

Here are some additional facts about Grant:

After Grant left office, he and Julia went on a grand overseas tour, traveling extensively throughout Europe, the Middle East and the Orient. Upon returning to the United States, he would have run for President again in 1880, but the Republicans nominated James A. Garfield instead. Grant eventually retired to New York City. He and one of his sons later invested with a Bernie Maddow-type swindler, and Grant lost all his money. He spent the final part of his life writing his memoirs, which, thanks to the help of Mark Twain, netted enough money for Julia to live on after his death. He died of throat cancer just days after finishing the manuscript. Today he and Julia rest in a massive mausoleum in New York City. 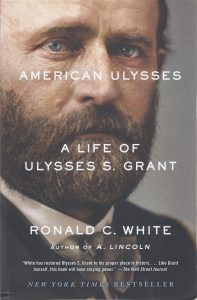 “American Ulysses: A Life of Ulysses S. Grant,” by Ronald C. White (pictured, the book I read) is one of two major biographies of Grant published recently. The other is by Ron Chernow. Both are what are often called rehabilitative, meaning the authors go back and re-examine a person’s reputation that has fallen over the years. Some historians have looked down upon Grant for a number of offenses, both real and imagined. Among them are that he was not as smart as Lee (Grant graduated 21st out of 39 in his class at West Point, while Lee graduated 2nd). Others have postulated that Grant was too indifferent to the large number of troops who were killed, and that he was a drunk. White argues forcibly against these accusations.

Having thoroughly enjoyed White’s previous biography of Lincoln, I decided to read his telling of Grant’s life story as well, and I was richly rewarded. “American Ulysses” was a page-turner, with many helpful maps, photographs and illustrations. He also presents Grant as a complete human being, describing his family life and even the books he read and the things he said to his friends and colleagues. And yes, I cried in the end!

In reading this book I got to know the general quite well. I can therefore say confidently that had a President Grant been in office when a group of white supremacists held a “Unite the Right” rally in Charlottesville, Virginia, last year, the response from the White House would have been quite different.