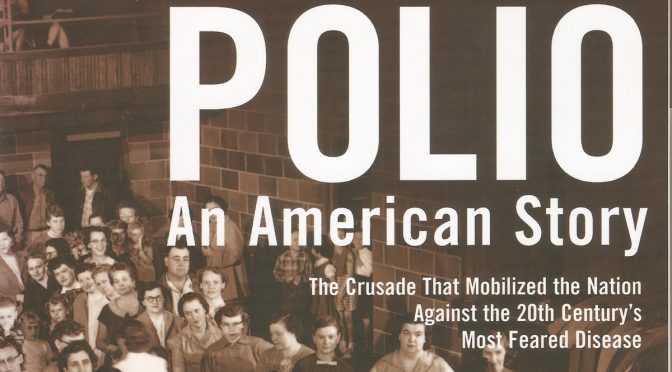 In “Polio: An American Story,” author David M. Oshinsky identifies four key heroes in the fight to eradicate the disease. They are Jonas Salk and Albert Sabin, the scientists who developed vaccines; Basil O’Connor, chairman of the National Foundation for Infantile Paralysis, the organization founded by President Franklin D. Roosevelt; and FDR himself, who was the world’s most famous polio survivor. My own mother was another.

FDR contracted the disease in 1921, after he had been governor of New York but before he became president. Like countless others, he was crippled for life by the virus. Many others died. During his convalescence he visited a property in Warm Springs, Georgia, which included a swimming pool and a hotel, and he purchased the property and turned it into a facility to help treat those with polio, mostly children. FDR brought in Basil O’Connor, his business partner, to run it. The fee was $42 per week, but patients who could not afford it were allowed to come anyway. FDR had used most of his life savings to purchase the property and later relied on private fund-raising.

Later, during his presidency, FDR founded the National Foundation for Infantile Paralysis, which still exists today as the March of Dimes. O’Connor ran the national foundation for decades. The purpose of the organization was twofold: First, to pay for medical care for those who were stricken by polio and, second, to fund research to develop a cure.

Over the decades the national foundation raised and distributed many millions of dollars. It was the first time such an organization had been formed to combat a disease, and it was groundbreaking in many ways. The fund-raising drives, which were clever and successful, involved local community involvement and later included having a “poster child.” Many of the initiatives also brought in celebrities, who hosted balls across the country each year on FDR’s birthday.

There had been an unsuccessful attempt at a vaccine in the 1930s, but it was not until many years later that Jonas Salk and Albert Sabin, working separately, developed the vaccines that were ultimately successful. The Salk vaccine came first and was used to treat most children in the United States in the 1950s. The Sabin vaccine followed and was used to treat most children in the Soviet Union and in many other parts of the world. The Salk vaccine involves an injection or a series of injections of a killed virus, while the Sabin vaccine involves ingesting weakened live virus on a sugar cube.

Salk and Sabin were rivals, and their differing approaches on how a vaccine should be developed — and how quickly — led to bitter disputes in the scientific community.

I learned a great deal reading “Polio: An American Story” by David M. Oshinsky. I think the author did a good job of explaining the science without getting too complicated for a reader without much of a medical background. He also did a very good job of putting the disease into the context of the times. The book is also helpfully illustrated with many pictures, which help tell the story of this dreaded disease and how it was conquered.