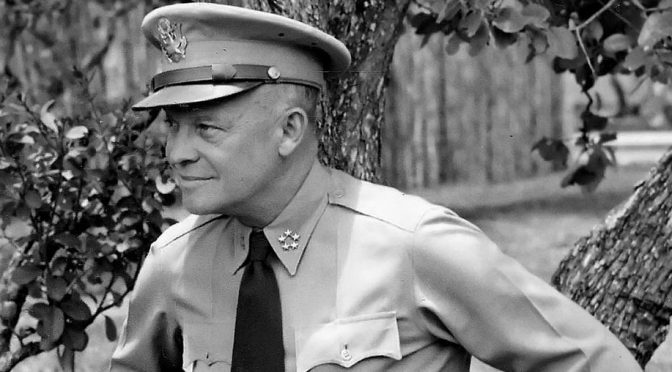 After Eisenhower led the Allies to victory over Hitler in World War II, he went on to become our nation’s 34th President. Elected in 1952 and re-elected in 1956, he served two full terms. His predecessor was Truman, and his successor was JFK. Richard Nixon was his vice president. Ike, a moderate Republican, was immensely popular. He was a fiscal conservative but not an ideologue. Unlike many in his party who wanted to dismantle the New Deal, Ike oversaw the expansion of Social Security and increased its benefits. He implemented an increase in the federal minimum wage. He supported more access to health care, and he established the Department of Health, Education and Welfare. He funded the development of the polio vaccine.

On making our country a bit less racist, Eisenhower made some progress. Ike’s five appointments to the Supreme Court included both conservatives and liberals, most notably Chief Justice Earl Warren, who wrote the landmark Brown vs. Board of Education of Topeka decision that desegregated the nation’s schools. Ike signed civil rights legislation in 1957 and 1960, but these bills were largely toothless. In the American armed services, meanwhile, Truman had already ordered desegregation but the military leaders had dragged their feet. Ike got better results.

Ike was responsible for two of our nation’s most important infrastructure projects, the St. Lawrence Seaway and the Interstate Highway System. I’ll say more about the highways in a moment.

Dwight D. Eisenhower was born in a small town in Texas and grew up in Abilene, Kansas. He had many siblings, mostly brothers. The family was not wealthy. Ike married Mamie Doud, and their marriage featured many ups and downs over the years. They had two sons, the first of whom died in early childhood. The son who survived, John Eisenhower, had a military career like his father. John Eisenhower had four children, the eldest of whom, David Eisenhower, would eventually marry Richard Nixon’s daughter Julie.

Like many generals before and since, Ike attended West Point. He was an average student there. He passed a merit exam to get in. Attending West Point allowed Ike to embark upon a successful military career. When World War I broke out Ike wanted to be sent to Europe, but instead he was assigned to a number of posts stateside. He became an expert on tanks.

By the time World War II broke out Ike had advanced in rank. Leap-frogging over many other generals who had more seniority and battlefield experience, he was chosen to lead the Allied invasion of northern Africa. Later, even more importantly, Ike led the allied invasion of France as Supreme Allied Commander. D-Day, as it became known, was the largest military engagement the world has seen before or since. It involved incomprehensible planning and organizational detail. Under Ike’s leadership, the invasion was a success and turned the tide of war against the Nazis once and for all. All during the war, to his credit, Ike dealt skillfully with three of the world’s most daunting and colossal egos: the American President Franklin D. Roosevelt, the British Prime Minister Winston Churchill, and French resistance leader Charles de Gaulle. After WWII ended, Ike served as Army Chief of Staff and Supreme Commander of NATO, and he also served as President of Columbia University.

Although Ike had never disclosed a party affiliation — or if he even had one — both the Democrats and the Republicans wanted him to run for president. When he ran on the GOP ticket in 1952 he did so in opposition to the isolationist wing of his party that was headed by Senator Robert A. Taft of Ohio, who was President William Howard Taft’s son. That November Ike defeated the Democratic nominee, Illinois Governor Adlai Stephenson, in a landslide, and he did so again in a rematch in 1956. His campaign slogan was “I like Ike.”

Here are some additional notes about Ike:

This is all according to “Eisenhower in War and Peace,” the 766-page biography by historian Jean Edward Smith. Published in 2012 and filled with lots of photographs and references to original source material, this biography offers so much information that my book report today can only scratch the surface. In his footnotes, Mr. Smith dispels some misconceptions about Eisenhower perpetrated by others over the years, especially by author Stephen E. Ambrose, who is considered by many (wrongly, in my view) to be the top historian on Eisenhower. This is another long book that seemed short. It was a pleasure to read. Approximately a third of the book is devoted to Eisenhower’s upbringing and early life, and then it’s about equal parts World War II and the presidency. For me, the emotional high point of the book came in the aftermath of Brown vs. Board of Education, when Ike sent in federal troops to Little Rock, Ark., to protect the right of nine black students to attend public school. 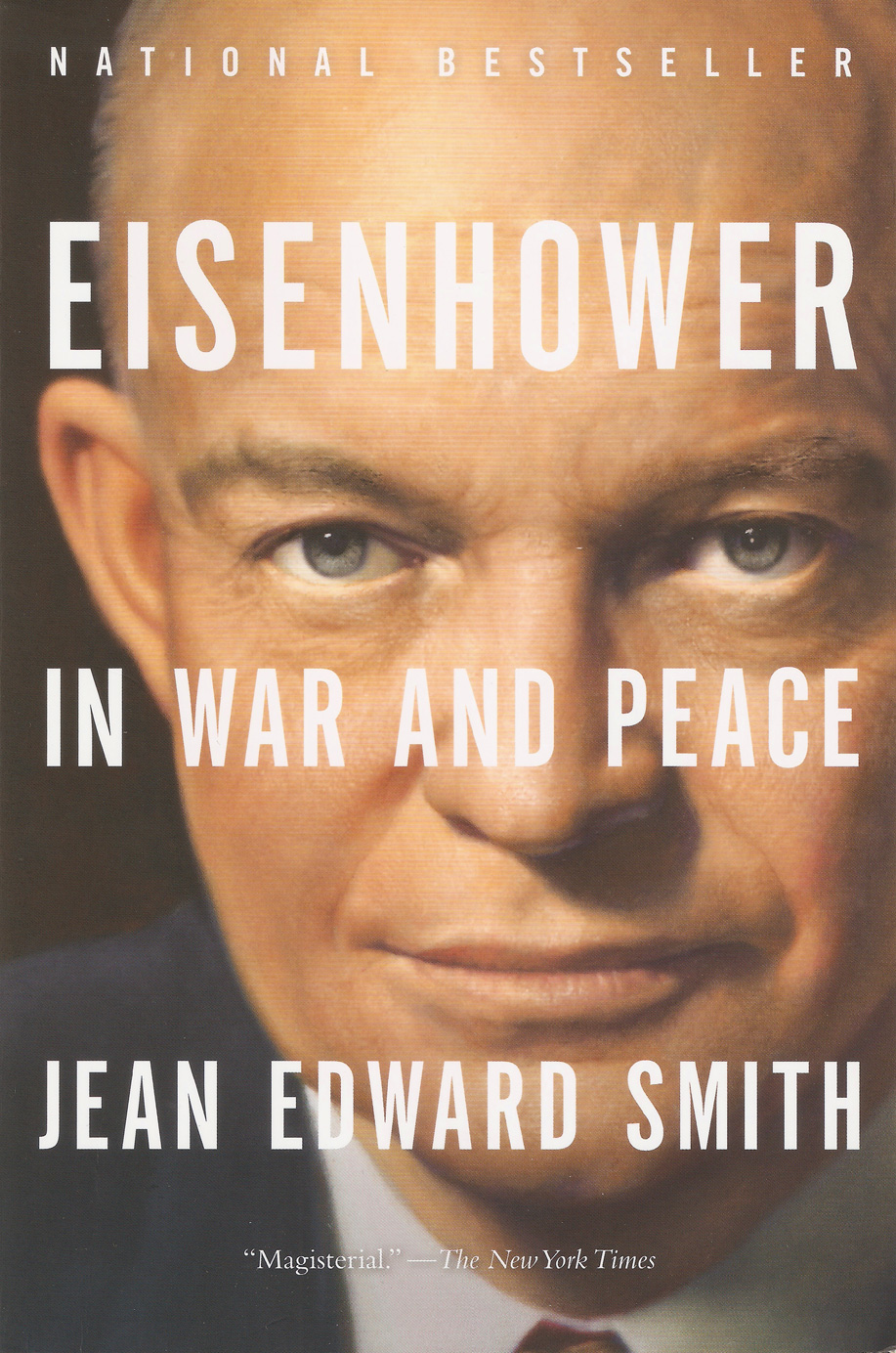 In my view Eisenhower was, all in all, a good president. Sometimes he is referred to as a “caretaker president,” but that might not be a bad thing. As Mr. Smith points out in this book, Ike kept the economy on an even keel and balanced the federal budget. He worked well with Democrats in Congress, and he had a genuine respect for the U.S. Constitution. To his credit, Ike also ended the fighting in Korea and prevented the U.S. from going to war with the USSR and China. The way I see it, steering a middle course, especially in times of peace and economic growth, is usually the best. And the American people approved of Ike throughout his entire presidency by ranking him very high in public approval polls and in his two landslide victories, in ’52 and ’56.

But — on the other hand, not everything Eisenhower did was beneficial to all Americans and to the country as a whole. Perhaps intentionally or because he wasn’t paying enough attention, Ike allowed the CIA to undermine and ultimately topple the legitimately elected governments in Iran and Guatemala, setting off unfathomable negative consequences. It also became a pattern.

Also troubling, and not mentioned in the book, is that it was under the Eisenhower administration that an irrational, unfair policy of excluding gays and lesbians from the federal workforce was implemented as part of the Communist witch hunts of the McCarthy era. This anti-gay discrimination in the federal government — known today as the “lavender scare” — lasted for decades and did untold damage to countless lives.

Also not mentioned in the book and even more problematic, in my opinion, is that the country’s fancy new highways, combined with federal neglect of trains and public transportation, paved the way for white flight to the suburbs and the growth of the shopping mall — all of which fostered racial and economic disparity, the effects of which we are still dealing with today.