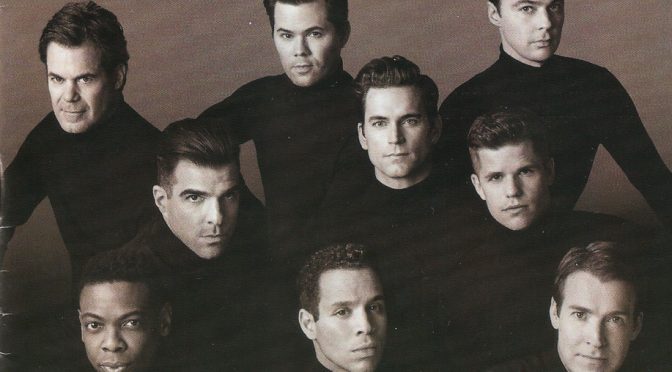 I thought this was a really good production. Better than I was expecting, and definitely better than the reviews led me to believe it was going to be. This is an old play, set in 1968. Judy Garland was still alive when this play takes place. This is pre-Stonewall, when you could get arrested for dancing with another man in a bar or wearing drag in public. Texting had not yet been invented! People used the telephone to call each other. And rotary dial phones, at that!

These guys gave excellent acting performances. I thought Jim Parsons (the guy who plays Sheldon in Big Bang Theory), was really good. He injured his foot and had been performing in a walking cast, but he did not have the cast on yesterday, that I could tell. The only one I was disappointed in was Zachary Quinto, as Harold, which was really surprising to me because he played a bitchy gay guy so well in American Horror Story. I just didn’t buy into his portrayal, although he delivers some of the play’s funniest and best-timed lines, to great effect. I must mention that it was especially fun for me to see Matt Bomer (Donald) strip down and take a shower. And the Cowboy was hot in his tight jeans and boots. I thought the sexiest one was Andrew Rannells, as Larry.

I’ve seen Boys on stage here in NYC twice before, plus the movie and even a “making of” documentary a few years back. It’s not the most uplifting work. In fact, when I had first seen the movie way back in the days before RuPaul and the TV show “Glee,” I found the characters rather sad and pathetic, behaving like self-loathing drama queens. They lash out at each other with bitchy put-downs, often referring to each other as “she.” Somehow, in this reworking, the creative team behind this production got it to work better. I didn’t walk out feeling so despondent. In fact, I was quite moved. This version has been shortened and revamped — turned into a one-act play. The cast this time is made up entirely of out gay actors. They made me laugh, and they made me cry. Judging by the reactions of the other audience members, I got the feeling that many were seeing “Boys in the Band” for the first time.

This is playing at the Booth Theater (named after the actor Edwin Booth, brother of John Wilkes!) After the performance Frank and I stood with a crowd of about 80 other fans in Shubert Alley to see the performers come out the stage door. We saw Tuc Watkins, Brian Hutchinson, Robin de Jesus and Matt Bomer emerge, and all were very courteous and gracious with the theatergoers, signing autographs and doing selfies with many. It amazes me how any actor can do this after every performance. Before the show, Frank saw Charlie Carver (who plays the cowboy) go in.

I don’t say this often about many Broadway shows, but if you get a chance to see this, definitely go!